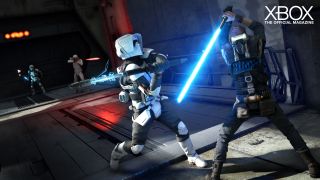 Before I start going all goo-goo eyes over Respawn's action adventure, a quick disclaimer... You should probably ignore everything I'm about to write. Why? Because – and I can't believe I'm about to openly admit this – I actually like the Star Wars prequels. Yes, even Attack Of The Clones. Clearly I'm a few Midi-chlorians short of a full Padawan picnic and should promptly be ignored by all sensible Force fans.

Still here? Wizard! You're kind to look past my bizarre tolerance for both Jar Jar Binks and my non-ironic appreciation of Hayden Christensen's acting ability – pssst, he's pretty good in Revenge Of The Sith, and don't let anyone tell you otherwise. My main man Anakin Skywalker is certainly a more three-dimensional screen presence than poor old *checks notes* Cal Kestis.

This goody two-shoes Jedi runaway is so absurdly bland, I definitely didn't just need to look up his name on Wikipedia. Nooope. The only thing that interests me about him? He looks 'sort of' like a pal of mine... admittedly a bit more ginger version who's much better at slicing up stormtroopers with a laser sword.

In spite of this miserably bland Force-wielder, I'm actually having a bloody good time with Star Wars Jedi: Fallen Order. The pacing is snappy, I dig the design of its various alien planets, and swinging Hal... sorry, Cal's lightsaber is a hoot. I'm actually semi-amazed Respawn did such a terrific job with the combat. It's not that I was doubting the studio's mad skillz – Titanfall 2 and Apex Legends are terrific. No, it's more to do with almost every previous Star Wars title utterly failing to do justice to the power fantasy of wielding a far, far away galaxy's most iconic weapon.

In this light, my lack of faith was both disturbing and totally justified. The only game I'd argue that gave good saber before Fallen Order was the excellent Star Wars Jedi Knight II: Jedi Outcast. Boxy and a little bland by modern standards, it nevertheless delivered the most convincingly tense sword battles in any game I've ever played. What Outcast understood, and what Fallen Order (mostly) gets, is that a lightsaber shouldn't be a glorified glowing baton.

This is an energy sword that can cut through pretty much any material in the galaxy. You shouldn't have to bash some Imperial lackey in the face six or seven times before they go bye-bye. In Kyle Katarn's adventure, 95% of a lightsaber showdown is all about jockeying for position.

As soon as you make that crucial parry that gives you the window to actually strike your Sith opponent, the fight is won. These magic space wizard swords can and should be able to slice enemies in half with a single swipe, and though Fallen Order's Dark Souls leanings obviously mean boss battles aren't settled with a single strike, at least squishy stormtroopers mostly buy the (moisture) farm with one blow.

Whether effortlessly deflecting blaster rounds or scampering along walls like a Force-sensitive Prince Of Persia, Respawn has absolutely nailed the Jedi power fantasy. Alright, so the Wookiees looks horrendous and Cal is so dull, he may as well be a walking piece of celery (with really good hair), but Fallen Order's core combat makes this an adventure I'm happy to dedicate my evenings to. Now if you'll excuse me, I'm off to watch Revenge Of The Sith for the 17th time.