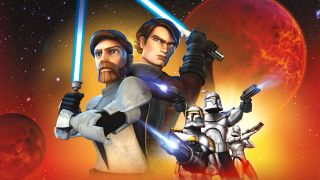 What the hell was Luke Skywalker talking about when he said he’d bullseyed a womp rat in his T-16? Who was the bounty hunter Han Solo ran into on Ord Mantell?

The original Star Wars trilogy featured plenty of throwaway references to events that happened off-screen – world-building that wasn't explained at the time, yet provided tantalising glimpses of a wider universe that existed beyond the movies. And while not all of them warranted further explanation – nobody needed why Han was called Solo – others were worthy of a deeper dive. Indeed, a couple of lines from A New Hope’s opening crawl describing the Rebels’ first victory against the Empire – not to mention the theft of some infamous secret plans – were enough to spawn the brilliant Rogue One. However, where those famous opening lines were intriguing, it was a single throwaway mention of an old war that sparked our imaginations.

Obi-Wan Kenobi first mentions the infamous Clone Wars during A New Hope. All we knew at the time was that the wise Jedi Knight had fought alongside Luke's father. But we had so many more questions. Who were the clones? Why were they fighting? And why was Obi-Wan Kenobi involved? Surely, the prequel trilogy would be focused on a conflict that had been the subject of fan speculation for two decades?

Not quite. Star Wars creator George Lucas thought otherwise and relegated the Clone Wars to an afterthought that would only be explored on TV – first in Genndy Tartakovsky’s 2D animated shorts (2003-2005), then in the CG incarnation (2008-present) that debuted after the prequel movies were complete.

Rather than diving headlong into the Clone Wars, the story of The Phantom Menace begins in a period of comparative tranquillity, focussing on Darth Vader as a child. It wasn’t until the final act of Attack of the Clones that the conflict exploded into life. Then, by the time Revenge of the Sith kicks off, the war has more or less wrapped up. In other words, a conflict that was responsible for reshaping the galaxy, transforming the relatively prosperous Republic into the totalitarian Empire, took place almost entirely off-screen.

If the Emperor’s critical error was allowing Bothan spies to obtain information about his second Death Star, George Lucas’s was putting the focus of the prequels so firmly on Anakin Skywalker. His decision to prioritise the so-called Skywalker Saga, making one family’s trials and tribulations more important than the fate of an entire galaxy far, far away, means sidelining crucial bits of the narrative. Yes, Anakin’s turn to the dark side is pivotal, but it’s not the whole story – by foregrounding Anakin, Obi-Wan and the Jedi so much, Lucas loses sight of the everyday people (and aliens) caught in the crosshairs of war. Where the original Star Wars trilogy is about ordinary folk making a difference, the only people who have any effect in the prequels are either superheroes (aka Jedi) or members of the political elite.

Lucas arguably hamstrung himself by picking up the story a whole decade earlier than he needed to. It wasn’t necessary to see Anakin as a kid to understand his fall, just as Walter White’s descent into evil didn’t need to be prefaced by Breaking Bad: The Early Years. Yes, Anakin’s childhood is where the first seeds of his turn are sown, but the ideas of Anakin being conceived by Midi-chlorians, having to leave his mother behind on Tatooine, and being too old to begin his Jedi training could have easily been explained away in a couple of lines of dialogue – the same way, in fact, that Lucas had alluded to the Clone Wars in 1977. In effect, Lucas wasted an entire movie explaining a couple of character beats – and not even a podrace and the epic Darth Maul scrap justify that as a storytelling choice.

Anakin as a child is, unfortunately, not an engaging character. He says “yippee!” way too much, asks if Padme’s an angel, and has no agency in what’s meant to be his movie. Anakin only evolves into a decent protagonist as an adult, when he’s a functioning, but flawed Jedi at the height of his powers. By that measure, the story told in the prequel trilogy shouldn’t really have started until the end of Attack of the Clones.

Which is why Star Wars: The Clone Wars – which returns for a final season on Disney Plus in February – is a glimpse at what the prequel trilogy could, and should, have been. Despite being told in short, 22-episode bursts, the show helps the Clone Wars – and the Star Wars galaxy as a whole – make sense. In fact, no other Star Wars release – with the possible exception of its animated successor, Star Wars Rebels – has done more to expand Star Wars lore.

In place of the whiny teen we saw in the prequel movies, Anakin is a genuine hero. Sure, he makes mistakes, but the fact he’s more obviously a good guy makes his ultimate fall to the Dark Side all the more tragic. We also meet Anakin’s apprentice, the brilliant Ahsoka Tano (absent from the movies), see plenty of Jedi on the battlefield, and start to regard them as actual characters rather than just random faces in a dull council chamber.

Crucially, The Clone Wars is not all about them. Yes, the Jedi knights remain the focus, but unlike in the prequel movies, other characters play a part too. We see the peaceful planets that become reluctant collateral damage in the Separatist/Republic conflict, encounter resistance movements (one of them containing Saw Gerrera, who’d later turn up in a key role in Rogue One), and – for the first time – meet the individual clone soldiers under the helmets.

The criminal underworld that had been a key aspect of the original trilogy, yet barely an afterthought in the prequels, comes back to the fore, as bounty hunters like Cad Bane, Aurra Sing and the bereaved young Boba Fett become pivotal. The Mandalorians, previously the stuff of Star Wars legend (and the creators of Boba Fett’s armour), are finally introduced as a fully formed race, straddling both sides of the conflict. In wannabe Sith Asajj Ventress, the show has an antagonist more than worthy of the movies. And let’s not forget that The Clone Wars is where the much loved Darth Maul first came back from the dead.

Why did The Clone Wars reach parts the prequel trilogies didn’t? It owed a lot to the fact that, in showrunner Dave Filoni (who’s now directing episodes of The Mandalorian), it had a bona fide Star Wars uberfan at the helm. He relished the chance to get geeky about things like kyber crystals, or other elements from the vast Expanded Universe in a way that Lucas perhaps didn’t.

Filoni also made sure that The Clone Wars prioritised telling exciting, dramatic stories, which was undeniably the right call seeing as this interstellar conflict is where the real drama of the prequel trilogy era took place. Fourteen years after Revenge of the Sith, it’s clear that there was no need to preface Anakin’s turn to the Dark Side with podraces or an awkward romance on Naboo. The Clone Wars are what made (and unmade) the man, and the animated series shows what we missed when George Lucas chose to turn them into a footnote.

Star Wars: The Clone Wars returns to Disney Plus in February.