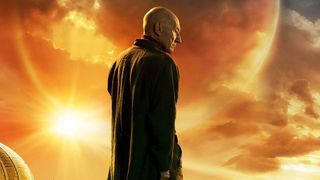 Captain Jean-Luc Picard may have boldly gone through seven seasons of Star Trek: The Next Generation and four big-screen adventures, but it’s nearly two decades since he handed the keys to the USS Enterprise back. That means the eagerly anticipated spin-off series Star Trek: Picard will have to navigate a difficult path through the neutral zone, balancing hardcore fans' expectations and delivering a show understandable to newcomers who can’t tell the Bajorans from the Borg. So how on Earth do you keep everybody happy?

“I think thing you always want to reach for is a great universal story,” Star Trek: Picard executive producer – and overseer of Trek’s TV empire – Alex Kurtzman tells GamesRadar+. “Once we’ve figured out how to tell that story, then we can ask, ‘Is it Star Trek enough?’ We’re coming from an assumption that we’re going to embed all of the necessary Star Trek ornamentation!

“The interesting thing about this is what other franchise would allow you to tell a story about a 92-year-old man who’s closer to the end of his life than the beginning, asking, ‘Did I make all the right choices?’ I think that’s why this show’s going to impact a lot of people – even if you’ve never seen The Next Generation, what you’re seeing is the wonderful story of a man reckoning with his life. I think that’s why it will hopefully reach everybody.”

That’s not to say they’re getting hung up on making Star Trek: Picard look like The Next Generation did back in the ’80s and ’90s. This is a show beamed directly from the current golden age of TV, with movie-level production values. In other words, any newcomers to the 53-year-old saga should find it easy to get settled in the late-24th century.

And Jeri Ryan probably knows better than most, seeing as she’s played former Borg Seven of Nine in both Star Trek: Voyager and Star Trek: Picard. “This was vastly different, at least for me,” she reveals. “These sets are… epic doesn’t begin to cover it. You walk onto the Borg Cube and you’re walking onto a Borg Cube.”

“It felt like a Trek fan’s dream,” adds Jonathan Del Arco (Hugh), another Borg returnee from the TNG era. “I was like wait a minute, you really built a Borg Cube? The inside of one? On two sets? How is this even possible? It’s massive! And I get to walk on it? I don’t have to pretend I’m on a Borg Cube, I’m on a Borg Cube? It was mindblowing, because the budget’s so much bigger and the scope… That’s the thing about the show, the scope of it is so cinematic and so big that it’s a Trekkie’s dream.

“But,” he continues, “I would say that Picard is still the most personal, emotional, philosophical side of Star Trek. It’s really Trek at its heart.”

Are you a newcomer to the Star Trek franchise? Then it's perhaps worth watching these 10 key Star Trek: The Next Generation episodes before Picard begins.