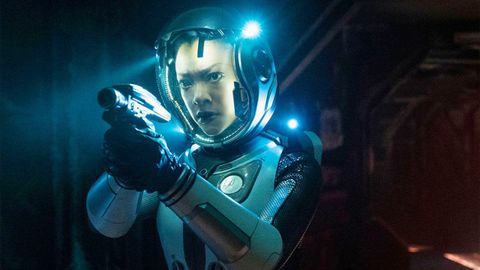 We finally get to know another of Star Trek Discovery’s secondary characters better in a heart-wrenching episode, which comes just a little too late

Flaunting its newly acquired fugitive status, the USS Discovery welcomes aboard a familiar face in the form of Admiral Cornwell (Jayne Brook). Clearly Pike (Anson Mount) is hoping to make his case against Section 31, but Cornwell has other things on her mind. After interrogating Spock (Ethan Peck) herself and finding his account of what happened at the hospital persuasive, she reveals the damning evidence against him, and boy, is it bad! Clearly there’s something else going on and after Cornwell tells Pike that she’s been locked out of Control (the computer system the Federation uses to help make all its strategic decisions) it’s off to Section 31 to investigate.

While on the way to Section 31, we learn a little bit more about one of the Discovery’s most interesting, but definitely underdeveloped characters, Airiam (Hannah Cheesman). A bit of backstory is just what we’ve been waiting for as the cyborg’s heartbreaking past is revealed in a clever bit of storytelling, but unfortunately, it comes a little too late as Airiam then gets swept away in the show’s main storyline. You might remember that the show teased Airiam becoming infected with the computer program from the future, which tried to kill Pike and Tyler in episode 7. Well, those three little red dots in her eyes come out to play in this episode and turn Airiam against her crewmates just when we’re beginning to realise what she means to them.

Cheesman (who took over from Sara Mitich, who played the cyborg in Star Trek Discovery season 1) rightly deserves heaps of praise for her performance as it’s no small thing to bring viewers to tears through a mountain of prosthetics. It’s just a shame she’s only really given this one episode to shine. It also means that during the finale in which Tilly (Mary Wiseman) gives an emotional plea to Airiam, reminding her that Burnham (Sonequa Martin-Green) is her friend, we’re left wondering, ‘Is she really?’ More could have been done to develop Airiam’s character before she took centre stage in this episode, but even with that oversight, her story arc is still effective and poignant.

Elsewhere, Burnham and Spock are getting reacquainted and trying to work out why the Red Angel is appearing to him, but the estranged siblings are struggling to find common ground. As Spock points out, they haven’t seen each other in years and there’s still clearly bad blood between them which is preventing them for working together effectively. In an attempt to refocus their efforts, Burnham suggests a three-dimensional chess match which quickly devolves into an argument. Both Peck and Martin-Green fizzle and pop with energy as they bat insults (well, measured Vulcan insults) back and forth, and it’s pretty shocking to watch Spock be sarcastic before becoming truly angry. Die hard Trekkies will probably cringe at his outburst, but it fits with this version of his character which is suffering from “extreme empathy deficit”. For my part, I’m not sure I’ve ever been so engrossed in a mere conversation before, but Peck and Martin-Green have superb chemistry as siblings whose complicated relationship is all wrapped up in conflicting pain and love.

Who is the Star Trek Discovery Red Angel?

Not much happens in Project Daedalus (except for a sort of revelation about Discovery’s true enemy, which I found too confusing to be fully impactful). That said, audiences will no doubt respond to Airiam’s emotionally compelling storyline, which is pretty impressive considering this is really the first time we get to know her. Despite how much the storyline works, I can’t help but feel that if the groundwork for this episode had been laid earlier on in the season, it would have been much more effective (just like Saru’s familial story in episode 6). Spock and Burnham’s antics are pretty ineffective too, but given how watchable they are on screen together and the fact that’s it’s all surely leading to something big during the season finale, we can let them take their time. All in all, this latest episode of Star Trek Discovery mainly suffers from how much we’ve come to expect from the show.

Need to catch up? Here's how to watch Star Trek Discovery online, wherever you are in the world.

We finally get to know another of Star Trek Discovery’s secondary characters better in a heart-wrenching episode, which comes just a little too late