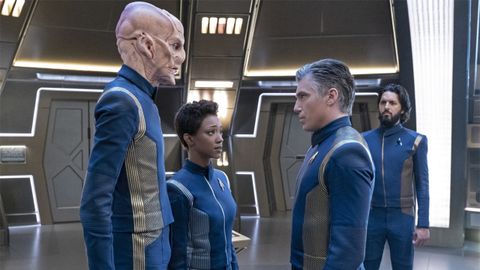 It's nice to more of Saru's backstory being explored, but The Sound of Thunder really should have played out over multiple episodes rather than being squashed into just one.

Star Trek Discovery season 2 continues its ongoing mission to fill out the backstory of its more secondary characters with episode 6, The Sound of Thunder, which is all about Saru (Doug Jones). But while it’s nice to see that Saru’s story won’t just be relegated to a Short Trek spin-off, the whole thing feels more than a little rushed and Discovery’s usual fast pace works against this emotional and important plot, which should have been given more than one episode to explore. With some story spoilers from this point onwards, here’s our verdict on Star Trek Discovery season 2, episode 6, The Sound of Thunder.

We all knew that when Saru’s threat ganglia fell off in episode 4 it was a sign of things changing for the Kelpien. They might as well as revealed a little tag attached to his head that said ‘Warning: Will trigger strong emotional changes when removed’. This is the episode in which Saru starts to experience what life without his threat ganglia - without fear - is like and while it’s an interesting development for the character, it all happens way too fast. No sooner is Saru done having a perfectly normal catch-up with Discovery’s doc about the changes his body is going through and he’s facing off against Captain Pike (Anson Mount) on the bridge and acting in a very non-Saru-like way. While anyone paying attention to the signs will have seen this coming, it happens so quickly that we barely have time to process what it means for the character before he’s off on an away mission to save his homeworld.

Not content with merely focusing on Saru’s biological changes in this episode, the plot of The Sound of Thunder visits his homeworld of Kaminar and the two races - Kelpien and Ba’ul - who occupy it. It was a safe bet that season 2 was going to deal with Kaminar at some point (the Ba’ul’s oppression of the Kelpiens is very un-Star Trek), but it’s a shame to see such a rich storyline done and dusted in just one episode. Saru only lost his threat ganglia two episodes ago and his emotional changes have only started to manifest at the beginning of this episode, but by the end of episode 6 he’s exposed the truth to his people, broken General Order One, and completely changed the landscape of his homeworld forever. That’s not say any of this is bad. It just feels like a plotline, which should have played out over multiple episodes throughout the season, rather than being relegated to one very neat and disposable (in terms of how it relates to the rest of the season) episode.

Putting the unwelcome fast pace to one side for now, episode 6’s main storyline plays out beautifully. Those who’ve seen the Short Trek The Brightest Star (here’s how to watch the Star Trek Discovery Short Treks on Netflix if you haven’t managed to find them yet) will be pleased to return Kaminar and to get to know Saru’s sister Siranna (Hannah Spear) better. Despite the limited screen time both Jones and Spear do an impressive job of accurately conveying the range of powerful emotions their characters are going through after being reunited, and I’ll never fail to be impressed by the depth of emotion I witness on both their faces through the layers of prosthetics. While Burnham (Sonequa Martin-Green) naturally takes a bit of a back seat in this episode, it’s also pleasing to see that her role as Saru’s adopted sister (which he granted her in episode 4) hasn’t been forgotten and she’s beside him, supporting and protecting him through, whether that’s through his difficult reunion with Siranna or during his fight against the Ba’ul.

For their own part, the Ba’ul make their Star Trek Discovery debut as eerie, mysterious monsters from a horror movie, which fits Saru’s account of them perfectly. They come across as the epitome of evil as a Sauron-like voice threatens Discovery when they make contact. Add to that the fact that no one has set eyes on them in generations and the all-seeing surveillance towers, which occupy every Kelpien village and more than a few parallels with The Lord of the Rings spring to mind… But all this was clearly just suppose to be smoke and mirrors and I expected the real-life Ba’ul to be something much different to the stuff of Saru’s nightmares. They do have a secret to be uncovered (which I won’t spoil here), but when we finally see the Ba’ul in the flesh they are, disappointingly, monstrous, which feels at odds with what we discover about their race and makes it hard to see them as anything more than one-dimensionally evil.

Elsewhere on Discovery, Pike and Tyler (Shazad Latif) are butting heads in such a way as to make it clear neither one trusts the other one little bit, Culber (Wilson Cruz) is, unsurprisingly, not quite feeling himself after his resurrection, and Tilly (Mary Wiseman) is sieving through all the data Discovery collected from that big red entity in episode 4, which, as it turns out, comes in handy in this episode. This in itself is a bit of a problem as the events of episode 4 were a bit lackluster and confusing anyway, and it’s now been nicely slotted into an already too perfect episode. It just feels like The Sound of Thunder is trying to pass off too many coincidences as natural in a really short space of time. And no, before you ask, there’s still no sign of no-show Spock!

While it’s really pleasing to see Saru at the centre of things for once and the events of The Sound of Thunder are important and far-reaching, I can’t help but feel like it would have had more of an impact spaced out over multiple episodes and it’s disappointing to be done with such a compelling story about a great character so quickly. Add to that a few too many nice happenstances, which don’t really make sense, and episode 6 is a good episode that’s just lacking a certain something. Despite its flaws there’s lot to love here for fans and no one will walk away feel unsatisfied, but Discovery really needs to start making some headway on its main season plot before it becomes too tiresome.

Find out what else you should be watching with the best new TV shows coming in 2019.

It's nice to more of Saru's backstory being explored, but The Sound of Thunder really should have played out over multiple episodes rather than being squashed into just one.