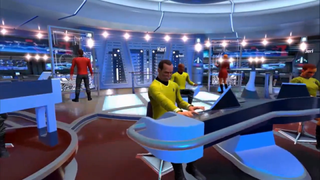 If you love Star Trek, the chances are you don’t want anything so vulgar as a third person cover shooter. You want a game about calmly making decisions with your capable crew. You want a game that lets you make orders in an officious voice, gently gliding you to safety, set in a universe sparkling with hope. You want velour, by God. Star Trek: Bridge Crew is that game.

Bridge Crew is a VR title, revealed by Ubisoft at their E3 conference. It lets you pilot a starship with a team of friends, putting you in control of USS Aegis. Each player has a  specific job to do. If you’re captaining the ship, for example, you’ll be reliant on information from your crew, but you’ll be giving the orders.

The scope of Bridge Crew was wonderfully illustrated in a video which united genuine Star Trek heroes Levar Burton, Jeri Ryan and Karl Urban. Burton described it as //better// than working on the show, because he could actually see the interior of the ship. Is there any higher praise?

In many ways, this is the logical extension of two great co-op space games already available - Spacewar and Artemis Bridge Simulator - but it offers so much more in VR. It promises the full Star Trek experience in a shared virtual world, and a fresh twist on co-op gaming. And, if that doesn’t tempt you, it’s your best chance to use the special Star Trek voice you’ve been practising forever.

Check out every announcement and full summary details on our Microsoft E3 press conference page.

Matt is GamesRadar's senior commissioning editor. His ideal game would be a turn-based beat 'em up set in Lordran, starring Professor Layton and Nico from Broken Sword. There would also be catapults and romance.