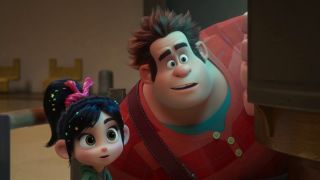 Even at 95, Stan Lee made sure his presence was felt in all things Marvel (and Disney, for that matter) right until the very end. He makes a blink-and-you’ll-miss-it appearance in Wreck-It Ralph 2 but, unfortunately, the Spider-Man creator never got to watch the scene before he passed away.

Speaking to The Wrap, co-director Rich Moore confirms that: “He did not see it. It seems very poignant now on his passing, and it’s very special that we were able to have him as part of our film.”

The cameo in question sees Vanellope and Ralph travel to Oh My Disney website and, among the Eeyores, C-3POs and, yep, the Disney Princesses, you get to see Stan Lee. While he doesn’t speak, it’s great to see him pop up among the decades of iconic figures and rub shoulders with them.

But it could have been so much different and, whisper it, even better than the few mere frames we got with Stan the Man. As Moore’s fellow director, Phil Johnston, explains: “For a moment, we had this thing called ‘Marvelize Yourself,’ where the human avatar is able to go through what looks like a metal detector and turn into a Marvel character… And as part of that scene, we had Stan Lee go through the Marvelizer. But when we decided to lose that joke and not use the scene.”

Stan Lee popping into a Marvelizer and coming out the other side as Stan freakin’ Lee sounds hilarious. I’m sure there was a good reason as to why that was left on the cutting room floor but, man, I hope that’s included in the deleted scenes, even if it’s a piece of concept art.

After all, Stan Lee always embodied what it meant to be a larger-than-life character with his feet still placed firmly on the ground. What could be more Marvel than that?

Want to see more of the best Stan Lee cameos? Oh, go on then!