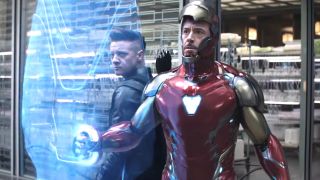 I’m crying 3000. Spider-Man: Far From Home almost had a lot more than just *that* cameo. The writers of the MCU Spidey sequel have revealed that two notable cameo appearances were spitballed but eventually cut: Iron Man himself Robert Downey Jr. and Donald Glover, who previously appeared as Miles Morales’ uncle, Aaron Davis, in Spider-Man: Homecoming.

Writers Chris McKenna and Erik Sommers told THR: “We had talked about possibly hearing Tony's voice through EDITH at one point, but I think a little goes a long way and we didn't want to lean too hard.” However, the pair agreed that, even if an RDJ comeback did come to pass, “It was always going to be re-used footage.”

Despite dying in Avengers: Endgame, Tony Stark does appear throughout Far From Home, but only via the medium of a retconned Captain America: Civil War clip which helped set up Mysterio’s vendetta against Stark.

Glover, meanwhile, would have appeared just before Peter and his classmates left New York behind for a European vacation. Unfortunately, Glover’s planned role (whatever that may have been) was also dropped.

As the writers explained, they only wanted Spidey in the Big Apple for so long before jetting off on holiday: “We definitely thought, ‘How great it would be to bring back Aaron Davis again?’ Other considerations come in. We went down that road a little bit, then the movie really spent such little time in Queens and gets to Europe pretty quickly. Some ideas you just have to give up.”

Of course, we still ended up getting a big cameo as JK Simmons’ return as J. Jonah Jameson, having previously played the character in the Sam Raimi trilogy. That’s not to say Glover (and maybe even RDJ) won’t be back at some point in the future – but this movie could only ever have space for JJJ and his ultra-massive ego.

Stop the presses: A certain J. Jonah Jameson might feature heavily in our list of the top 10 most comic book accurate superhero movie castings