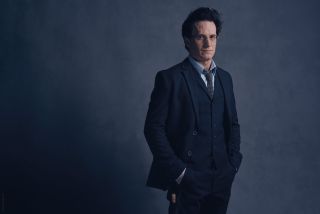 We don't have long to wait until the magical curtain lifts on Harry Potter and the Cursed Child in London but here's our very first look at some of the cast. An adult Harry Potter, his wife Ginny Potter (née Weasley), and son Albus were the first to be revealed in a week of character unveilings over on Pottermore but now we've had the full line up of Ron and Hermione Granger-Weasley and their daughter Rose, as well as Draco Malfoy and his son Scorpius. Take a look at the gallery below.

Now we can see exactly how Jamie Parker looks as our favourite wizard, it's reassuring to see he's rocking that scar perfectly. Author and play co-writer J.K Rowling is pleased. "He simply is Harry now," she says. "There's a kind of relief in watching him, he gets it so right."

Those strange feelings from seeing one of your favourite characters grown up? You're not alone, and the cast understands the importance of getting the magic exactly right. "These are stories that people have lived with for their whole lives, they’ve grown up with and now they’re adults re-joining the tale, picking it up where they left off and I’m one of them," says Parker.

"It’s a unique gig in the sense that you have seven volumes of back story that you get to bring on with you. And we were all very keen to make sure that the first time you see Harry it just feels right." Joining him on stage is Poppy Miller as Ginny Potter who looks equally on point. Miller is especially pleased with her sleek haircut and jumper which she says she thinks of as a really tasteful Pgymy Puff. Poor Arnold....

And then there's Albus Potter. Obviously named after the headmaster himself, Harry's son is played by Sam Clemmett who says he's probably wearing hand me down robes from his brother James. "This is what Albus wears at the start of the show,’ he says. "I had the idea he was wearing James’s – his older brother’s – hand-me-downs. So I wanted him to feel quite uncomfortable, and be able to play with his clothes."

When it comes to Ron and Hermione,  the pair are now married and have a daughter who is just about to start at Hogwarts. Ron is Paul Thornley, while Hermione is played by Noma Dumezweni. Their daughter Rose is played by Cherrelle Skeete who as well as almost having the same surname as a certain prying wizard journalist has revealed a little more information on her character.

"Rose is ambitious, obviously her mum is Hermione so she’s got a lot to live up to," she says. "I think they’re quite similar in the fact they put a lot of pressure on themselves. And she just wants to do the right thing."

Also revealed was Draco Malfoy and his son Scorpius. Draco still looks like a total Slytherin played by Penny Dreadful and Merlin actor Alex Price,  and Scorpius certainly takes after his father in terms of looks. Played by Anthony Boyle, Scorpius is apparently rather charming when it comes to the ladies. J.K. Rowling herself has says "I've got a feeling Scorpius is going to do nothing to turn girls off the Malfoy men."

The play is getting its first public previews in London's West End next week but will officially start its run on the 30th of July. The script will be released in book form on the same date. Get those Potter parties organised stat.