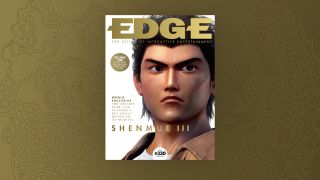 Yes, it’s actually happening. Almost 20 years after the release of the first game in Yu Suzuki’s famous – and infamous – series, Shenmue 3 is almost here. And in the new issue of Edge magazine, arriving with subscribers now and on sale this Thursday, we find out whether, after all these years, the game can possibly meet the colossal weight of its fans’ expectations.

Edge's world-exclusive look at the game yields new details on Shenmue III’s overhauled combat system, its new setting, and the people that live within it – including Shenhua, protagonist Ryo Hazuki’s new companion. We learn how the Affinity system affects how characters respond to Hazuki, only opening up to him once he’s earned their trust and respect. And we discover how Suzuki and team have leaned on two decades’ worth of progress in game design and technology (and, as you might expect, the ways in which they haven’t).

All longtime series fans will need, however, is simple confirmation that Shenmue III is actually, finally, honest-to-god happening after all these years. “I believe fans who have been waiting patiently for this game will enjoy the Shenmue-specific vibe and world-feel, which is different from any game out there,” Suzuki tells us. “I decided to go all-in with making the world-building distinctive. There are a lot of open-world games out there, but I don’t believe many, if any, are quite like Shenmue.”

There’s plenty more besides in Edge 330, including an exclusive dive into Telling Lies, the new live-action game from Sam Barlow, maker of Her Story. The Making Of… delves into Fable II with the help of Peter Molyneux and series creators Simon and Dene Carter, among others. And there’s a load of reviews with numbers on the end that people on the Internet are already arguing about.

Edge 330 goes on sale Thursday, February 28 in both print and digital forms. Print subscribers, however, are reading their new issues right now. To join them, check out the latest Edge subscription offers.