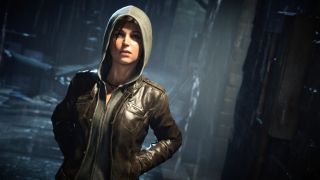 Lara Croft's next adventure was a no-show at E3 2017 but another leak has given us further reason to suspect it will be named Shadow of the Tomb Raider, as well as a strong hint at its new location. NeoGAF user NeoRaider spotted the following logo treatments under the "previous work" section for video game marketing firm Takeoff LA (they're no longer available on the site).

You might recognize the image on the bottom-most logo from Rise of the Tomb Raider, but it's common to reuse old assets for the early stages of promotional design. Definitely seems like the name will be Shadow of the Tomb Raider in any case. Here's the really interesting part.

These illustrations show Lara doing her usual exploring / skulking / wound-bandaging routine, but look at where she's doing it. Many of the images depict what appears to be a Mesoamerican step pyramid (you know, like Chichen Itza) and thick jungle vegetation. It looks like Lara's next stop after the fictional island of Yamatai and the Siberian wilderness will be southeastern Mexico and/or Central America. She might be able to fashion her own wooden spears, too - maybe firearms will be a bit harder to come by this time around.

Lara, how do you keep ending up in situations like this? Couldn't you just party in Cancun for a while then take an air-conditioned bus out to the ruins like a regular tourist? While we're waiting for an official announcement for Shadow of the Tomb Raider, check out our lists of the best PS4 games and best Xbox One games.