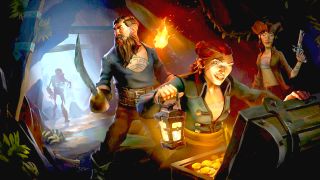 Sea of Thieves is a game tailor-made for cooperation with fellow seafarers, and the Affiliate Alliance is a new tool to help lonesome pirates find their crew.

The Affiliate Alliance is made up of community-made groups designed to coordinate between teams and attract players who might not have friends that play Sea of Thieves. Right now, there are English, French, Italian, Portuguese, Deutsch, and Russian communities for players around the world to connect and team up.

As a Sea of Thieves player who regularly captains a Sloop with no crew, I am precisely the Affiliate Alliance's target demographic. While admittedly I do enjoy the freedom and relaxing grind of manning a small ship in peaceful solitude, it's not as fun when a fully-provisioned and hostile Galleon ship descends upon my helpless one-man operation.

If you fancy yourself a uniter of sorts, you can submit to become an affiliate and lead your own community of social pirates. If approved, you'll join a Discord server with other community leaders and receive support from a Sea of Thieves Community Manager. There are a number of rules for submission though, straight from Rare:

Even the most seasoned pirates quake in fear at the site of Sea of Thieves' most treacherous threats. Here's how to beat the Kraken in Sea of Thieves and fulfill your rite of passage.