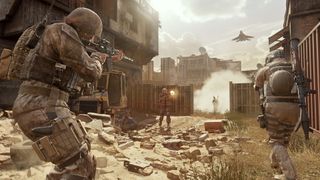 Activision wants you to be talking about Call of Duty: Black Ops 4 right now. Indeed, many people are, especially as its newly revealed multiplayer-focused experience is less than five months away from release.

But the future is always a tantalising topic of discussion, especially when the latest reports about Call of Duty's 2019 prospects are so interesting. According to reports from both CharlieIntel and GamingIntel, sites which have both accurately leaked Call of Duty news before, the next game in Activision's blockbuster franchise will be Modern Warfare 4.

That's right, if these rumors are to be believed, Call of Duty's most revered series is getting a sequel, from Infinity Ward no less, as we know for certain that the studio is slated to develop 2019's instalment.

Corroborating this news is the fact that, just two days ago, someone on Reddit discovered a list of developers (via Linkedin) who had recently moved over from Respawn Entertainment to Infinity Ward.

This is more significant than you might think. Respawn is known as the studio responsible for Titanfall and Titanfall 2, yes, but it was first founded by former Infinity Ward developers who had all been instrumental in their work on the original Modern Warfare trilogy.

The leaked list reveals a lot of senior team members are back at the studio they helped to define, which supports these reports that Infinity Ward is finally working on a sequel to the series that it's famous for.

There are even reports of a Battle Royale mode in the works for this hypothetical Modern Warfare sequel, which makes sense given that Black Ops 4 has already been confirmed to include one and Activision isn't one to ignore lucrative multiplayer trends in the industry.

Funnily enough, Bill Murray (no, not that Bill Murray, but the voice actor for Modern Warfare's Captain Price) apparently confirmed that a third Modern Warfare sequel was in development all the way back in 2012, but Infinity Ward strictly denied this, before eventually going on to release Call of Duty: Ghosts and Call of Duty: Infinite Warfare in 2013 and 2016 respectively.

Neither of those games were received particularly well back when they came out, so perhaps Modern Warfare 4 will be Infinity Ward's comeback story... that is, assuming these rumors are even true.

Got a taste for the call of duty? Read up on our list of the best Call of Duty games that you can play right now, and let us know your favourite instalment in the comments.