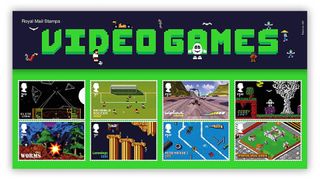 Royal Mail are releasing a special set of video game themed stamps to celebrate pioneering games designed in the UK during the 1980s and 90s.

Featured in the collection are stamps with designs from Tomb Raider, Elite, Dizzy, Populous, Lemmings, Micro Machines, Sensible Soccer, Wipeout, and Worms Elite. Set to go on sale on January 21, you can already preorder the various stamp sets and bundles from Royal Mail's website.

One of the sets you can snap up includes ten stamps of Lara Croft set against an image of the latest Tomb Raider release, Shadow of the Tomb Raider. The designs on the stamps feature looks from the original Tomb Raider on PS1, as well as designs from the more recent reboot series.

You can also get a 12 stamp set including a miniature Tomb Raider collection with four special stamp designs featuring Croft, and another set with eight different game designs. Each stamp includes the name of the game and the year it was released, such as the influential space-faring Elite from 1984, or Dundee-based studio DMA's classic, Lemmings, from 1991. All of the stamp designs are also featured on a nifty set of postcards.

Royal Mail collaborated with the Association for UK Interactive Entertainment (Ukie) and video game experts Sam Dyer and Julian 'Jaz' Rignall to bring the special stamps that "celebrate the joy of gaming" to life. The stamps feature some fantastic designs and it's great for avid stamp collectors, long-time players, or fans of the golden oldies.

As well as being available to buy online, the stamps will be available to purchase in 7,000 post offices across the UK. It's a pretty neat collection, and if you can get past just how great they are as a display piece, popping one of these fun designs on a special delivery you're sending would be a treat for any pal or family member you know who loves any of these classics.

Take a look back at the best games of 2019 with our pick of last year's best game: