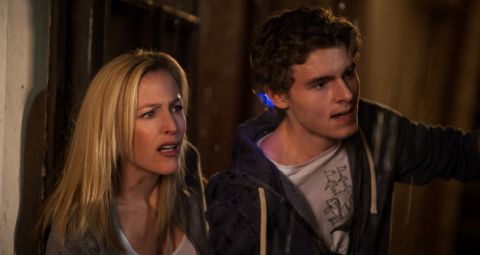 Though unlikely to give Michael Bay any sleepless nights, this family-friendly adventure has enough in its arsenal to overcome its budgetary limitations.

These are the droids you’re looking for.

Grabbers director Jon Wright returns with another trim sci-fi on a slim budget, a pound shop Transformers pitched squarely at the young ’uns that agreeably recalls the enterprising work of the Children’s Film Foundation when it’s not aping the Terminator series. Kids should be royally entertained, provided they’re not inspired to recreate the film’s running gag of having its fresh-faced heroes electrocute themselves with a portable car battery.

Giant robots have invaded Earth, confining its inhabitants inside their homes and zapping them into oblivion if they sneak out without permission. (Belfast-born Wright may have left Northern Ireland at the age of one but he still appears to have a beef with occupying armies.) Additional intimidation is supplied by human collaborators, chief among them Mr Smythe (Ben Kingsley) – a former geography teacher whose curfew-enforcing duties don’t prohibit some clumsy stalking of ex-colleague and single mom Kate (Gillian Anderson, lending star power but otherwise underused).

But enough of the grown-ups. Robot’s true protagonist is actually Sean (Callan McAuliffe), Kate’s teenage son and the one who discovers that a brief shock from the aforementioned car battery temporarily short-circuits the Big Brother tracker in the recipient’s neck. Determined to find his dad (Steven Mackintosh), an RAF pilot who went AWOL three years earlier, Sean takes to the streets with three friends to find them crawling with rebellious hold-outs. He also acquires a helpful psychic connection with his ED-209-style adversaries (shades of Edge Of Tomorrow here) that could prove vital if they are ever to be vanquished.

Shot in Northern Ireland and the Isle of Man, Overlords has its share of clunky moments yet nonetheless proves, like Monsters before it, what can be achieved when you’re short of cash but rich in imagination. It’s also brimming with charm, with a game supporting cast – Geraldine James, Tamer Hassan, the indomitable Roy Hudd – who clearly regard the whole thing as a great big panto.

Though unlikely to give Michael Bay any sleepless nights, this family-friendly adventure has enough in its arsenal to overcome its budgetary limitations.