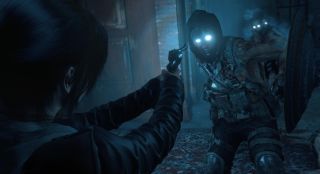 Locking snooty butlers inside freezers. Appreciating some seriously decadent architecture. Putting antique garden ornaments in peril while running an athletic obstacle course. Down the years, Lara and I have been involved in all sorts of hijinks while exploring her opulent English mansion, but we’ve never teamed up to take on anything quite like this. Rise Of The Tomb Raider’s 20th anniversary celebration DLC sheds an entirely different light on Croft Manor, and this time things are personal... and, y’know, a teensy bit dead.

I recently dove into the £7.99 expansion after enjoying the hell out of Crofty’s Siberian adventure when it launched in 2015. So it may have been a while since I dropped in on Lara and her grizzly bear chums, but I’m pretty sure she didn’t have quite so many problems with the undead when our paths last crossed. Yes, this DLC has a vaguely derivative zombie mode – enter Lara’s Nightmare. Stop rolling your eyes, please.

Like COD’s zombies, Lara’s Nightmare looks like Activision’s version of the undead on the set of Antiques Roadshow. It’s all frenetic blasting as hordes of coffin-dodgers force Lara into murderous feats of violent crowd management. The goal is simple: kill and evade a whole bunch of zombies, shoot three paranormal floating skulls, then eliminate a slightly larger, angrier paranormal skull... er, who just so happens to be a manifestation of Lara’s uncle and his rage over Lara inheriting the manor. See, very simple.

I’ll fess up, readers: I’m deeply rubbish at Lara’s Nightmare. Every time you fire up this mode the spawn points for enemies, skulls and weapons change, meaning you constantly have to alter the way you play it. Seeing as I’m useless at improv – despite my dreams of launching a successful standup career – Nightmare kicks my ass. A lot.

Still, at least peppering all those decomposing hordes with sweet, sweet lead reminds me how much I love Lara’s weapons. ROTTR’s gunplay is still excellent, and the tight spatial awareness and reactive undead-blasting show off just how much Croft’s shooting has evolved since the dark days of *whisper it* Tomb Raider Underworld. In a cute twist, various mission modifiers also reward me for taking out zombies in specific ways – say, performing ten melee kills. How can I resist when jabbing a pickaxe into ghoulish cartilage is so squidgy and satisfying?

Of course, Lara’s Nightmare isn’t really the main meal of this festering, yet lavish banquet. I hope you’ve left room for a big ol’ plate of repressed paternal pain, as this anniversary content also serves up Blood Ties, a new narrative-driven mission that probes at Croft’s relationship with her parents. After spending an evening shooting floating skeleton heads, unearthing Lara’s daddy issues is quite the nourishing palate cleanser.

Rebooted Raider may have expanded our heroine’s backstory in less absurd fashion than her prehistoric PS1 days, but ROTTR’s barely coherent yarn was drowned out by the din of all that wolf-pummeling, trinket-finding, Trinity-battling action. So it’s a credit to Crystal Dynamics that Blood Ties finally prioritises character motivation over an action-packed shoot-out.

If I wasn’t such a hollowed-out emotionless husk, the array of audio diaries – narrated by Lara’s mum and dad – may have tugged at my heartstrings more. As it is, listening to how Lara’s parents fell in love, as the ass-kicking adventurer rummages around Croft Manor looking for a key, and her father’s last will, is merely well-written window dressing. Hey, at least it’s nice to briefly unfurl that stiff Croft family upper lip.

Being a greedy git, all that zombie carnage and inheritance-hunting doesn’t fully satiate my craving for fresh Croft content. So it’s a good thing this celebratory expansion also contains tweaks to Endurance mode. ROTTR’s survival-focused gametype now lets you play with a pal in online co-op, with the mode’s relic-searching, bear-whacking action proving a good fit for players willing to band together to endure the savage Siberian wilderness. I even save a chum of mine from a wolf pack. I’m seemingly capable of human kindness after all. Who would have thought?

It’s good to see gaming’s First Lady back in action, and this is definitely worth a look for those who’ve been with Lara since the beginning times. With leaks suggesting a new Tomb Raider is already in the pipeline it looks like the Croft resurgence isn’t over yet. Here’s to another 20 years of crypt-pillaging, butler-freezing action. Poor Winston...