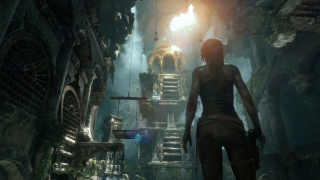 Well isn't this just like it was planned all along. The PS4 edition of Rise of the Tomb Raider has been announced as Rise of the Tomb Raider: 20 Year Celebration and has confirmed yesterday's October 11 release date leak. But this isn't just a PS4 version and nothing else. Lara's latest adventure comes with an all new story  chapter called Blood Ties that sees her returning to Croft manor to defend her birthright and this can be experienced with PlayStation VR. This also has a bonus "Lara's Nightmare" mode where you have to defend the manor from zombies. This bit sadly isn't VR compatible.

There will also be new co-op 'Endurance' gameplay where you can team up with a friend to take on challenging tombs in the wilderness together, and the game will come with all the previously released DLC - hello, Baba Yaga - as well as new outfits, weapons and Expedition Cards. The Blood Ties DLC, which will be made available for free to current season pass owners of the game on Xbox One and PC, has a full story part and this will be the first time we've ever had first person Lara.

“This year we celebrate 20 years of the iconic Lara Croft,” says Ron Rosenberg, co-head at Crystal Dynamics. “This provided the perfect opportunity for us to deliver a new Tomb Raider experience. With the addition of PlayStation VR support, you can play the world through Lara’s eyes for the first time in franchise history.”

And yeah, about those new outfits. A Lara card pack will let us replay the game with five classic Lara models from the games over the years. Time to play PS4 like its 1996. Between this and the excellent Baba Yaga: The Temple of the Witch DLC and Cold Darkness Awakened mode  where you can battle waves of infected predators, there's going to be no shortage of content with this new version. It looks like it's been worth the wait. Bring me those Croft manor zombies.