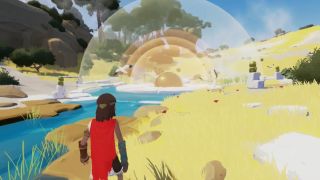 PS4 exclusive Rime made a big impression when it debuted at Gamescom 2013, with its curious blend of Ico-like puzzle solving and bright, colorful environments. Another trailer released a year later whetted our appetites, and shortly thereafter all went quiet. But the silence has ended, and Rime has now been re-revealed as a multiplatform game coming to PS4, Xbox One, Nintendo Switch, and PC in May 2017.

So where did Rime go for nearly two years? For unknown reasons, developer Tequila Works broke from their relationship with Sony, and spent much of their radio silence re-acquiring the rights to their game and searching for a new partner. In an October 2016 interview with GamesIndustry, studio CEO Raul Rubio also expressed an intense desire to polish the game to the expectations that had been set by the aforementioned trailers.

"In retrospect, it probably was too soon [to show the game], not because the trailer was not honest or real - it was the real game - but sometimes when the player sees something on the screen, they think it's final," he told GI. "It has beautiful graphics. It's done. But it's not that simple. Game development means that you spend much more time polishing the product than actually creating the content."

Despite the delay and saying that he would've handled things differently given the chance, Rubio insisted that players will be pleased when the final product launches, and that the story of Rime's development "is going to have a good ending."