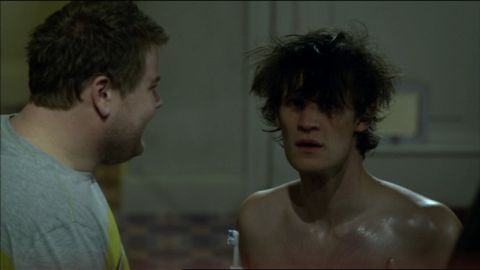 Back of the net or a red card?

THE ONE WHERE The Doctor is stranded on Earth and makes his way to 79 Aickman Road, Colchester, where an alien at the top of the stairs is preventing Amy from getting back to him.

VERDICT Last week’s “Vincent And The Doctor” was a fine standalone episode, both moving and meaningful. This week’s standalone ep is a comedic, [mostly] inconsequential trifle that once again demonstrates the show’s versatility. From the first line (“Amy, it’s definitely not the fifth moon of Syndicalista. I think I can see a Rymans”) it’s brimming with witty dialogue. James Corden is of course a big-time comedy operator anyway, but Matt Smith also proves adept at delivering Gareth Roberts’s amusing one-liners.

Essentially a sweet little love story, “The Lodger” won’t please all Doctor Who fans due to its frivolity, but it’s a pleasant diversion before we get into the heavy business of the Pandorica opening next week. The frugality of it may raise eyebrows too: they couldn’t even afford nets in the goals! While it looks like the cheapest episode since “Fear Her”, it is a good deal better than that season two story. The shadowy figure at the top of these stairs is effectively creepy, everyone else is rather loveable, the banter is great… and we get to see Matt Smith showing off his proper football skills. (What perfect timing this being shown the very night England kick off their 2010 World Cup campaign!) As for how it slots into this season quality wise, I’d say it’s mid-table – neither in the top half hunting for honours, or in the bottom half in danger of the drop.

NICE BITS & PIECES The Archbishop of Canterbury; the Doctor’s omelette; “Bow ties are cool” – again; the Doctor’s towel dash; the return of the crack; the Doctor’s wine-tasting; Amy finding the ring; “What if he’s a dealer?”

IN-JOKE The Doctor paraphrases another "the Doctor" – the EHM from Star Trek Voyager . Our Doctor tells the emergency crash program (a hologram): “Please state the nature of your emergency.” Superb!

TRIVIA Actress Daisy Haggard plays the very sweet Sophie. She previously played the sweet-seeming-but-not-sweet-at-all Debbie in Psychoville , and also turned up in series two of Ashes To Ashes .

TRIVIA 2 The Lodger was the name of the first great Alfred Hitchcock film, made in 1927, concerning a house guest who may be Jack the Ripper. It was remade in 1932, 1944 and most recently 2009. This "The Lodger" was based on a comic strip in Doctor Who Magazine issue 368, where the Tenth Doctor crashes at Mickey Smith’s flat.

DID YOU SPOT? Our pal Vincent Van Gogh on the fridge? Course you did. A leaflet was advertising an exhibition running from March to August 2010.

DID YOU SPOT 2? William blooming Hartnell – again! That’s his fourth appearance this season! And Patrick Troughton’s third. Also seen in the info flashes that the Doctor nuts into Craig’s head: Eccleston, Tennant (we think from “Human Nature”), McGann, Tom Baker (we think from “The Deadly Assassin”), Pertwee, plus a Reaper from “Father’s Day”, two Oods and Amy floating outside the TARDIS in “The Beast Below”. It mustn’t have been deemed important enough for Craig to know about the Sixth or Seventh Doctors...

EH? What was that picture in the hallway that we see a few times and is at one point right in-between Craig and Sophie when they’re talking? Who is that guy? Is it significant?

BEST LINES Footballer: “You are so on the team. Next week we’ve got the Crown & Anchor. We’re going to annihilate them!”
The Doctor: “Annihilate, no. No violence, do you understand me. Not while I’m around, not today. Not ever. I’m the Doctor. The oncoming storm... And you basically meant beat them in a football match didn’t you?”