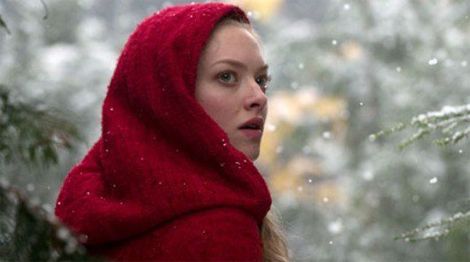 Catherine Hardwicke directed the first Twilight film, so it’s only fitting she’d helm this as well, since its very existence hinges on her 2008 hit.

Retooling the fairytale for the Team Jacob crowd, Red Riding Hood stars Amanda Seyfried as Valerie, the titular hood-wearer, a beauty living in a cursed village.

A bloodthirsty werewolf haunts the forest, and the villagers are forced to provide animal sacrifices to keep him at bay. But when the beast kills one of their own, they decide they’ve had enough and hire werewolf hunter Father Solomon (Gary Oldman) to rid them of the menace for good.

Fate may decide for her when it seems that one of the men may, in fact, sprout fangs and fur when the moon is full. There is a point in this film when Seyfried has a conversation with a CG wolf. It’s then you realise only Twihards could possibly take this film seriously.

Once you’ve abandoned all hope of seeing anything resembling the gothic horror promised by the marketing however, Red Riding Hood is actually a fun, goofy ride, albeit one lathered in chintz and froth.

Seyfried is perfectly cast, her natural fragility a wonderful counterpoint to all the man-beasts and moon-fiends, while the slasher-esque whodunit keeps you hooked. Make no mistake: Red Riding Hood is teenage trash. But much like the series that spawned it, it’s weird, campy, and (mostly) unintentionally funny teenage trash.