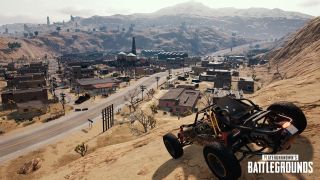 PlayerUnknown's Battlegrounds, more affectionately known as PUBG, will finally let Xbox One players - whether they're known or not - fight to be the last one standing on the game's Miramar map. I say "finally" because Miramar has been available on PC for almost half a year at this point, though to be fair it was only last month that it entered testing on Microsoft's console. Regardless, now everyone, everywhere can enjoy blowing each other up across the desert horizon.

Desert Map. Xbox One. May 24. Plus a title update that improves performance. Drop in here: https://t.co/K6pP7A2tzW pic.twitter.com/NXjsKfhPZaMay 17, 2018

There's not a whole lot to be said about Miramar itself; the new map is desert-themed and includes lots of vast, open areas as well as small depot towns. But there are other additions to appreciate as well: for starters, there's the new R45 revolver, Win94 lever-action rifle, and sawed-off shotgun, as well as a six-seater van and off-road pickup truck to make traversing those big empty stretches a little less of a hassle.

Players should also see some performance improvements once they've downloaded the update. From general stability enhancements to reducing texture pop-up on building interiors and terrain, this build should run smoother than any that's come before it.

Last but not least, two new pieces of cosmetic DLC have also launched alongside the Miramar map: the Golden Tracksuit (which is pretty much exactly what it sounds like) and the Instructor Set (which kind of looks like the Scout's outfit from Team Fortress 2). Both are $4.99 and can be purchased from the in-game store.