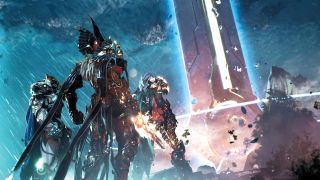 UPDATE: A full version of the trailer has now been leaked onto the internet, giving us a much bigger glimpse at an early build of the game. The new trailer is a minute long and shows us a lot more of the game's combat. Check out the extended footage below.

Original: Leaked combat footage of PS5 game Godfall has given us a tiny glimpse of what to expect from the next-gen Gearbox title.

A six second video that surfaced on Reddit shows the third person actioner, which is also coming to PC, in full flow briefly. Check out the supposed footage of Godfall, with weapons being swung with gleeful abandon, below.

According to the Redditor who uploaded it, this is taken from an internal trailer from early 2019. While any leaks like this are always worth taking with a healthy pinch of salt, the main character models do appear to be the same ones as in The Game Awards trailer, which lends it a bit more credibility.

There's a few things that caught in the footage, including what appears to be a lunging attack for one character at the start of the clip, as well as an attack direction indicator around the player character. For such a brief video, there's at least a few nuggets of info.

Since it was announced at The Game Awards, we've learned that Godfall will have a loot system, where you'll be going after "legendary weapons and armor" according to its website, as well as the option for "one, two, or three player co-op play".

In our recent interview with Godfall developer Counterplay Games CEO Keith Lee, he told us what to expect from the PS5 and PC game: "Imagine a co-op looter-shooter experience like Borderlands, but instead it's a co-op looter-slasher experience set in a more serious and brand-new fantasy world filled with heroic knights and ancient magic." We can't wait to see more of Godfall, and hopefully the next time we do, it'll be a slightly bigger (and more official) look.

There's plenty to get excited for this year, so why not check out the new games of 2020 confirmed so far?