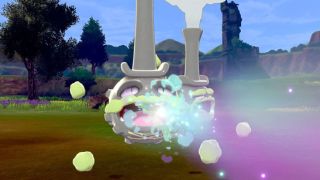 The latest Galar research update trailer for Pokemon Sword and Shield gave us a look at four new Galarian forms that we’ll be encountering in the Galar region this November. There are definitely some fun designs in the mix here, with Pokemon that could easily fit right into a Kiss tribute band, and one very sophisticated Weezing. So without further ado, here are all the new Pokemon Sword and Shield Galarian forms that were introduced.

Yes, your eyes aren’t fooling you. That really is a top hat wearing Weezing. The poison gas Pokemon is a Dark/Fairy type with the levitate ability. It emits purifying air from its head and collects toxic gasses from the air. So it's basically the most sophisticated air purifier you'll ever see. You can just imagine it sipping tea and being a true gent. Since the Galar region is based off of London, it's not hard to see how they drew inspiration for this one.

The Galarian Zigzagoon form is said to have a provocaitve attitude and loves to charge into battle. Basically the little raccoon Pokemon is always looking for a fight. Zigzagoon may look cute, but this form has got a lot of ‘tude. They are always on the move, and can often be found in fields, forests and towns. It's a Dark/Normal type Pokemon with the Pickup and Gluttony abilities.

Described as being rash and fearless, the Galarian Linoone is apparently the Pokemon of choice for angsty teens. That's got the newly revealed Team Yell written all over it. As the evolution of the Zigzagoon, it has the same colouring and stripes, and whole lot more attitude. Fast and agile, the Dark/Normal type Pokemon can reach speeds of up to 60 miles per hour and delivers some pretty darn damaging headbutts and tackles. Its abilities also include Pickup and Gluttony.

Obstagoon is a new Pokemon evolution introduced who can only evolve from the Galarian form of Linoone. Described as a blocking Pokemon, Obstagoon likes to taunt its opponents into attacking first and crosses its beefy arms to obstruct oncoming moves. Complete with the Reckless/Guts abilities, the final form looks and sounds like one tough cookie.

A Raccoon with attitude, eh? We're not going to argue with that. I for one won't be getting over Weezing ft. top hat and smoky beard for a long time yet. What a time to be alive.

Can't wait until November? Check out these 10 games like Pokemon to keep you going.