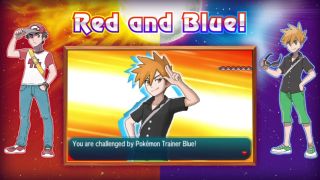 I know, I know. You're a big Pokemon fan, so you probably saw the leaked concept art showing the final evolutions of Pokemon Sun and Pokemon Moon's starters months ago. But seeing them in action and learning their pun-heavy English names is way more fun. So go ahead, enjoy a re-reveal thanks to a new trailer, and stick around for an appearance from some surprise guest stars:

Yup, that's good old Red and Blue (not Ash and Gary), grown up and ready to kick your poke-ass up and down the Alola islands. They're basically this entry's version of the Elite Four, only when you beat them you'll also be able to recruit them onto your side for team battles. I wonder if this will reignite those old "did you pick Red or Blue" debates on the playground?

As for the final forms for Rowlet, Litten, and Popplio, I'm pretty satisfied with how they turned out. I know many feared Litten would grow up to be another Fire/Fighting type, but Incineroar is actually Fire/Dark, which is at least a bit more unique. Decidueye is a suave-looking Robin Hood archetype (which is always good), but I think the real winner is Primarina.

This beautiful ballerina is the all-grown-up version of the goofy and shunned Popplio, and I'm pretty sure it'll be my pick when Pokemon Sun & Moon arrive on November 18.