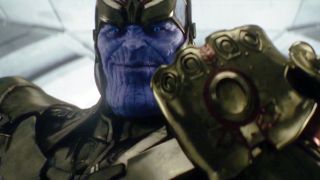 Thanos is a bit of a rascal, isn’t he? Avengers: Infinity War is surely going to prove that, even if what he gets up to in the third Avengers flick isn’t entirely clear. Or maybe it is. Marvel has released a behind-the-scenes clip showing off Thanos’ gauntlet – and it might have given us the biggest clue yet as to what direction the movie’s final act might go in. Potential spoilers follow…

First things first, the clip: Surely just your bog-standard competition reel, right? Look, there’s Chris Pratt doing his thing, oh and Elizabeth Olsen’s having a giggle on set, that’s nice. Wait a minute. That’s Thanos’ gauntlet with four Infinity Stones. When did he get those?

A special message for the fans. Find out how you can enter the Marvel Studios Ultimate Fan Sweepstakes for a chance to win a trip to the Avengers Infinity War Premiere, a tour of Marvel Studios, Captain Marvel Set Visit, and more! See official rules: https://t.co/v1qt9bJS7S pic.twitter.com/duwlScXBgy8 February 2018

Seeing as how Marvel probably doesn't go around making Infinity Gauntlets willy-nilly, we can be pretty sure this will be used in the final production. In the gauntlet we can see Thanos has possession of the Mind Stone (Vision’s headpiece, for lack of a better term), the Power Stone (or possibly the Soul Stone, but we’ll get to that), the Space Stone and the Reality Stone.

What’s left? The green Time Stone for sure and, while the red/orange hue of one of the stones makes it unclear, I’ll wager the missing Soul Stone is also on Thanos’ to-do list. That means, by the time Thanos makes his grand entrance on the MCU stage, he will be on the hunt for the Time Stone in the Sanctum Santorum – Doctor Strange, Iron Man and Bruce Banner are all featured there in the trailers – and, crucially, the Soul Stone.

That brings us to the movie’s final act. What better way to cap off the biggest superhero movie ever than with Thanos getting his purple mitts on the Soul Stone? It’s not a stretch to imagine that the Time Stone will be the fifth entry into the gauntlet – as we actually know where it is – but the Soul Stone is the biggest mystery of all, and one that the movie’s final moments could very well answer.

The definitive guide to Marvel's Infinity Stones: How many are there, where are they, and what do they mean for Infinity War?

Picture this: the Avengers try to hold off Thanos as he makes his way towards the location of the final Infinity Stone but, inevitably they fail after a huge battle. Thanos takes possession of the stone click the Gauntlet is ready. End credits. Avengers 4 is set; Thanos is a god and there’s nothing that can stop him.

Ok, maybe that’s a bit cliched. But, still, we have a better idea than ever before about Thanos’ endgame in Infinity War – and almost the exact order he’ll be picking up the Infinity Stones. It’s time to start cowering in fear, folks.