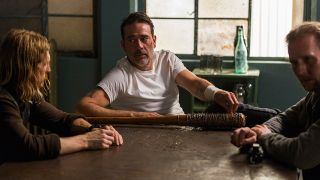 We're almost halfway through The Walking Dead season 8, yet the quality of each episode has been... inconsistent, to say the least. Not so with episode 5, The Big Friendly U, which raised the curtain on some long running questions, characterised our heroes and villains with interesting new layers, and teased more about the future of the show at large.

There were some big, big moments that took place in episode 5, and viewers were just as surprised as we were at some of the more unexpected events which unfolded on our TV screens over the weekend. Here's some of the best online reactions to last night's show, but consider this your first and last warning for major spoilers for episode 5.

As you would expect, Gregory finds even more ways for us to hate him, by lying and weaselling his way through any situation he finds himself in, including his interrogation by Negan at the beginning of episode 5. We're definitely supposed to hate him, that's for sure, but is he really meant to be this annoying?

Can we skip to the part where Gregory dies already?! #TWD #TheWalkingDead pic.twitter.com/4j8PK50H39November 20, 2017

The bromance is in jeopardy! After a few episodes' worth of shady looks and worried glances, Rick and Daryl finally addressed their differences the only way they know how. With a punch-up, of course. For fans of the brotherly relationship, this was a hard one to watch.

Rick and Daryl just watching the ammo burn is a big mood and an accurate representation of my life #thewalkingdeadNovember 20, 2017

The Big Scary U was a Negan-centric episode, to be sure, and the showrunners even attempted to make him more sympathetic as a character, after he confesses his tragic backstory to Gabriel in the RV. We weren't duped by his sob story, though. Not after everything he's put us through...

“I think... I’m here to take your confession.” - GabrielCREEPY PRIEST GABRIEL IS BACK. 😂#TWD #TheWalkingDeadNovember 20, 2017

When you start to feel bad for Negan but remember he killed Glenn and Abraham. #TheWalkingDead #TWD pic.twitter.com/ncXa4MTwzdNovember 20, 2017

I don't care about Negan soft side, he still killed Glen, and for that he got to pay #twd #walkingdead #TheWalkingDeadNovember 20, 2017

A helicopter has been spotted in seasons 1, 2, and 7 of The Walking Dead before, and it remains one of the biggest mysteries that fans have been grappling with since the show began. Season 8 has now resurfaced that enigma, as episode 5 features a scene in which a helicopter zooms above Rick on his walk back towards The Kingdom. But what does it all mean?!

Guys, I just really need to know what's up with the helicopter in Walking Dead already! I've been waiting since episode 1 #twd #gettothechopperNovember 20, 2017

Last time there was a helicopter we were introduced to the governor! Stay away Rick! RUN! #TWD #TheWalkingDead pic.twitter.com/5uZeBDx7XpNovember 20, 2017

A little bit of deja vu from the scene at the junkyard last season? Whose helicopter is that?? #TheWalkingDead #TWD pic.twitter.com/k3ZZ1zOAfkNovember 20, 2017

Meanwhile, at The Sanctuary...

In case you've been wondering what Eugene, Dwight, and the rest of The Saviours have been up to since the season premiere, don't worry, they've been spending their time playing games, sharing pickles, and accusing each other of treachery.

There’s a war going on outside and Eugene is playing video games?! 😐 #theWalkingDead #TWDNovember 20, 2017

I'm gonna start channeling my inner Eugene & carry around a big ass jar of pickles with me. #freshbuzz #talkingdead #twdNovember 20, 2017

How can I go from absolutely hating Dwight to loving him? #TWDNovember 20, 2017

Has season 8 finally found its groove?

So how did episode 5 fare overall? Some liked it, others didn't, but the general consensus seems to be that it was one of the best seen in season 8 so far.

That's not saying much, mind...

This is the first time where Negan was in any way compelling. This was a good episode. An episode this season really needed! #TheWalkingDeadNovember 20, 2017

Not really a push but best episode of this season so far. Only took like 4 bad episodes to get here #TheWalkingDead #TWDNovember 20, 2017

Worst season of #TWD!! It just keeps dragging on and on. Negan was good for the show when he came on but has since made it hard to watch.November 20, 2017