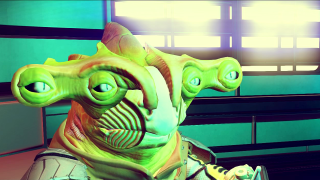 Your discoveries in No Man's Sky are supposed to be your permanent (if incalculably minute) mark on its vast universe, but they might already be gone. Several players on Reddit and NeoGAF have reported returning to their starting systems only to find their discovered animals and planets forgotten, leaving nothing but their custom system and planet names.

Reddit user Ultrasilvanus said they were even able to observe their old discoveries slowly being lost. First they found a previously discovered planet that appeared to be part way through the space-amnesia process. Then they returned after a day of making new discoveries, and found the old planet's entries were completely gone. They concluded that their oldest discoveries are being erased in chronological order.

The most rewarding part of the game, for me at least, is finding new places and knowing I could always stumble on other players' metaphorical footprints (and vice versa). Take that with how developer Hello Games has quietly backed off from other teased multiplayer features, and this discovery dilemma is straight-up awful. But No Man's Sky has had a number of bugs and server issues since it launched earlier this month, so it's entirely possible that this is just a glitch.

No Man's Sky is procedurally generated from the same "seed" for every player, so the amount of memory needed to store a vast number of discoveries would still be minimal; each entry in the galactic codex could be more of a labeled bookmark than a full copy of the item in question. Not to mention relatively few players have noticed this issue. All of that makes me suspect this is a bug rather than a deliberate part of the game.

I sure hope it's just a glitch, anyway. I would be heartbroken to know that my claim to the noble Thrillaminute Rex and friendly Trunksnuggler is destined to be forgotten.