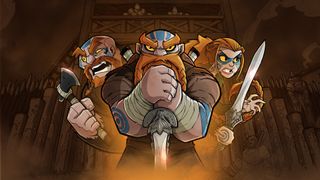 Like seemingly every other major console of the last decade, the Nintendo Switch dropped with a real dearth of launch titles. Though Nintendo has spoiled us with the  best Nintendo Switch games, the initial vibe on the console was that, like most of Nintendo’s offerings, there hasn’t been a tremendous amount of third-party support. But that narrative is starting to change, not only with a slew of announcements about future titles in the pipeline but with a quiet blizzard of third-party and indie releases that have mostly flown under the radar. If you’ve already wrung everything you can out of Super Mario Odyssey and Zelda: Breath of the Wild, fear not: here are five gems from the eShop you can snag for less than the price of a single new AAA game.

Sneakily one of the most entertaining games of the year, Wulverblade is a wild mashup of traditional 2D side-scrolling hacking and slashing and a surprisingly deep narrative based on the Roman conquest of southern England around 120 CE. It plays (and looks) like Castle Crashers by way of the Banner Saga, and is one of the most satisfying slash-‘em-ups of this generation. What it lacks in mechanical depth it more than makes up for with addictive, high intensity, brutal action, and it also has the advantage of being fully coop, which plays neatly into the Switch’s strengths.

Kamiko fits the Switch like a glove; a game that not only recalls some of Nintendo’s greatest hits (specifically The Legend of Zelda on NES and A Link to the Past on SNES), but is also perfect for bite-sized play sessions on a handheld. You play as one of three shrine maidens, slicing and boomeranging your way through a cast of colorful, inventive enemies, solving puzzles, and defeating bosses that combine 8-bit conventions with some modern twists. Kamiko is the sort of game that takes you back to the pure joy of your first video game experiences, the kind of game you’d want to be the first thing your own child every plays. It’s simple, fun, and a welcome injection of pure, candy-colored joy.

Speaking of games that hearken back to my misspent youth, Double Dragon 4 is, if anything, too faithful to the games that inspired it. But as someone who venerates Double Dragon 2 as one of the greatest games ever designed, this latest entry is a delightful romp down Nostalgia Avenue. Yes, its controls feel a bit clunky and dated, and yes, its visuals don’t iterate on so much as copy whole cloth those of its arcade and NES predecessors, but it nonetheless satisfies and challenges in ways that most ‘retro-inspired’ 2D side-scrollers fail to. Instead of a niche curiosity or a nod to history like many games of its ilk, Double Dragon 4 is a full, proper sequel that recalls some of the best experiences I’ve ever had with a Nintendo console.

I’m fully cognizant of how bizarre this sounds, but Gonner is a game that I wish were a meal. Maybe it’s just some strange sort of synesthesia caused by misfiring synapses, but something about Gonner’s visual palette, the stark, smearing watercolors, the explosions of light and sound, make me wish Gonner was an experience I could taste. My own bizarre predilections aside, though, Gonner is a fantastic roguelike that trades on how simple, quick, and intense it is, another easy sell on a console that you can take anywhere. The first time you slash your way through a room of enemies with a giant yellow scythe, or blast a pack of foes into bright splotches of red paint with a bubbling column of lethal energy, you’ll instantly understand what makes Gonner unique and essential.

Looking to buy a console? Here are the best deals on Nintendo Switch bundles right now

Picross has always been a treat for those of us obsessed with arranging and sorting, and never has its organizational appeal been more naked than in Picross S, which adds another layer of satisfaction in the form of its Mega Picross mode. If you’ve never dipped into Picross’ deep, addictive pool, the core experience is a puzzle game where you decode pictures by determining which squares in a grid are filled in according to numbers at the edge of each row and column. It’s a bit like Sudoku, and like Sudoku you can easily lose hours to it if you’re not careful, though something about unlocking a simple image makes it feel even more rewarding. And the Mega Picross puzzles take that simple, rewarding conceit and transform it into proper, challenging puzzles; confusing at first, when you do crack the mechanic for solving them it feels like you’ve unlocked some secret, heretofore untapped potential of your brain.