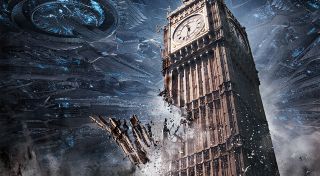 Jeff Goldblum's "They like to get the landmarks" has become the most quotable line from the Independence Day: Resurgence trailers, and with good reason. Roland Emmerich's 1996 classic is famous for the destruction of famous buildings, and the director will be back to do it all over again next month. 20th Century Fox have unveiled four new posters for the film that indicate which buildings are in the aliens' crosshairs this time round, and you can check them out below...

It looks like London, Paris, Singapore, and New York are all going to take a pounding when the aliens return to Earth. The fun is going to come from how the planet fights back - because we all know the humans are winning this, right? - and if the footage we've seen so far is are anything to go by it'll make for an entertaining watch.