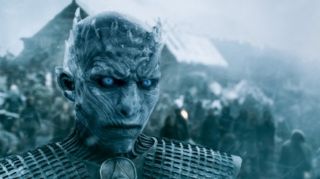 We’re in the middle of a blizzard of Game of Thrones season 7 hype: first there was the official poster, then there was a small matter of the season 7 air date and now HBO have released a teaser highlighting all of the houses and clans we’ve come to know and love (and really, really hate in some cases) in preparation for the ‘Great War’. July 16 can’t come soon enough.

Released on HBO’s Facebook page, the teaser splices quotes from previous seasons under their house sigils: there’s the Lannisters, the Tyrells, the Starks, House Targaryen, the Ironborn but, here’s the kicker, the sigils all end up crumbling by the teaser’s end. How’s that for a subtle metaphor?

Jon Snow’s voice then booms in reminding us, “There is only one war that matters… The Great War.” All signs are pointing North, then, to the oncoming threat of the Night’s King and his army of White Walkers.  Families, alliances and rivalries will all pale in comparison to Winter which, as Jon Snow stated in the season 6 finale, has arrived. Bring. It. On.