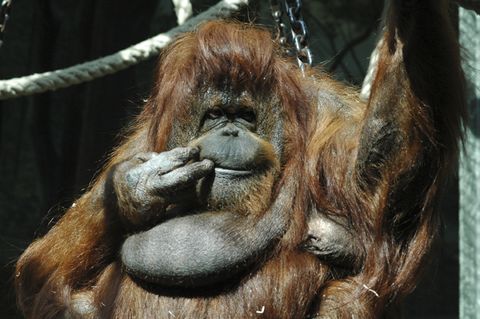 “A victim of her own rarity.” That’s how one onlooker describes Nénette, a 40-year-old, reddish-haired orangutan who’s lived in captivity since 1972 in Paris’ Jardin des Plantes zoo.

This highly evolved documentary from French filmmaker Nicolas Philibert (Être Et Avoir) observes Nénette from behind her enclosure’s protective glass, while on the soundtrack we hear comments by her keepers and daily visitors.

If the tea-drinking Nénette remains an enigmatic figure, Philibert makes fascinatingly clear how we humans project our own feelings and thoughts onto her.