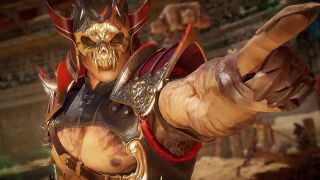 From the moment it went live, Mortal Kombat 11 has taken a ton of flak for the way it makes you grind to unlock its kosmetic komponents. As promised, NetherRealm Studios and WB Games have just detailed a patch coming soon to all platforms that should alleviate the community's concerns, including a substantial gift of in-game currencies and tuning for the overly difficult Towers of Time challenges.

Traditionally, Mortal Kombat games and their secret-filled Krypts have been extremely generous with extras like costumes, additional fatalities, and character art. But Mortal Kombat 11 is extra stingy, forcing you to repeatedly throw yourself against the Towers of Time gauntlets or cough up real-world cash if you want to make any headway. The Towers of Time felt particularly egregious, as some are only temporarily available and often require you to use characters you're not familiar with against wildly overpowered AI opponents.

"We're dedicated to bringing you the best experience possible and working to get the latest updates and patches live across all platforms," WB wrote in a Reddit post detailing the incoming changes. "We're aware of the difficulty issues in Towers of Time, and while we've made some changes, rest assured there are more on the way."

To help ease complaints about currencies, players on all platforms will receive a hefty gift of in-game currencies: 500,000 Koins, 500 Hearts, 1,000 Soul Fragments, and 1,000 Time Krystals. That sum should go a long way towards unlocking chests, with enough Hearts to open two of the premium Shao Kahn chests and a $10 value of Time Krystals. It's still not clear when exactly this gift will go live and how long it'll be available for, and it doesn't seem like the prices of chests within the Krypt are being adjusted as of right now.

PC and Switch players will be getting updates split into two parts, the first of which should hopefully be live soon, while PS4 and Xbox One players will have to wait a bit longer (likely due to patch approval processes). In the meantime, you can check out the full list of planned changes below:

Lucas Sullivan
Lucas likes his games like he likes his music: eclectic. With all the weird and wonderful stuff he's played over the years, the two of you are bound to feel the same way about something!