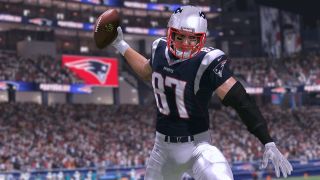 Late in 2015, we ran a feature charting the history of the Madden Curse – and wondering whether it had spread to sports other than the NFL, after Ronda Rousey’s first defeat following her appearance on the EA's UFC 2 cover. But one athlete isn’t phased by the prospect of it leading to injury or loss of form: Madden NFL 17 cover star Rob Gronkowski.

The Patriots tight end was announced as new Madden’s cover star last week, and says he simply doesn’t think the curse exists. “I've never really believed in that type of stuff,” he told Esquire. [Look at] Odell [Beckham] last year, with the year he had. Calvin Johnson beat the receiving record when he was on the cover. Richard Sherman went to the Pro Bowl the year he was on it. So I believe all that's in the way past. Now it's future time.”

Gronkowski’s boxart appearance marks the first time since 2010 that EA itself has selected the Madden cover star, rather than putting it to a fan vote. He admits its up there with the other individual accolades earned during his career, such as the four Pro Bowl berths secured in 2011, 2012, 2014 and 2015:

"It was an honor to make it into the game when I was a rookie. To get even a taste of it back then was super cool… but to be on the cover now is just a dream come true. And the cover features my "Gronk spike," which makes it even cooler that it's my touchdown celebration on it. It's a blessing, and to be in that category with so many elite players from Madden covers – it's just awesome."

Gronkowski’s appearance on the packaging isn’t the only detail EA has revealed of its marquee Gridiron game’s latest edition. Ball carriers are getting additional special moves, with a new ‘path assist’ system that helps you “navigate and anticipate” downfield. Defensive AI, meanwhile, gets a total overhaul, with the engine finally properly differentiating between man coverage and its zone equivalent.

Perhaps most excitingly, special teams plays such as punts and field goals are all being redesigned, with a new kicking meter offering additional challenge (at last!), and better abilities to block kicks.

We’ll have much, much more in an exhaustive post-E3 look at the game.