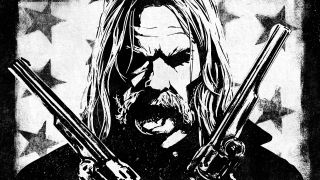 The score captivated us so much we dedicated a chunk of our review to it: "A word – alright, several gushing sentences – on the music. Woody Jackson has done a sensational job on the soundtrack. The composer has scored every Rockstar title since the original Redemption, and this is his most aurally arousing work yet. The last game was celebrated for several wonderfully judged music moments, the most famous being Marston’s ride into Mexico to Jose Gonzalez’s ‘Far Away’. While the prequel may not have a song that’s as note-perfect as that haunting melody, the tracks that accompany the story’s key moments all work beautifully. As for general background music, Jackson’s score is both electrifying and eclectic. Somehow, it can dovetail between shredding your nerves during a terrifying cave assault involving cannibals, and perking up a scene where your cowboy chums celebrate some successful DIY by downing all the whiskey.

Interested in haunting cowboy music? Who isn't? Listen to the score below or buy it on iTunes today.

Red Dead Redemption 2 is available for PlayStation 4 and Xbox One.