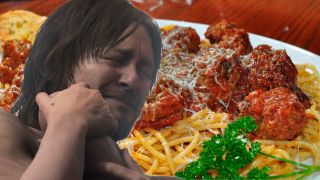 The best way to get a feel for how far along Death Stranding development is? With an extended metaphor about an Italian restaurant, clearly. Spoiler alert: the menus and dining tables are still up in the air. Kojima gave the update of sorts during a Tribeca Games Festival discussion with interviewer Geoff Keighley.

"It's moving on PS4," Kojima answered reluctantly at first. "Overall the general plan for the project… there's a plot. We're working with the Decima engine and we're continuously doing different tests for game systems, characters, different environments. We're continually testing these aspects. And so far it's going pretty well."

Decima Engine also powers Horizon: Zero Dawn, so we know it can render the hell out of natural vistas and robo-saurs. But Kojima's demands are a little different. You can watch the full interview here, starting at 5 hours and 30 minutes in, if you prefer to hear the rest from the man himself (or his translator if you don't understand Japanese).

"And for those experiments that end up in success, we're further testing and looking at that plot [in more detail] and we're trying to put all these elements together," Kojima added. "Let's say [actor Norman Reedus' character] is walking in New York. It's not in New York, by the way! The game is not technically set in New York. Just as an example. We're trying to see what we can depict with the Decima engine, if it actually looks like New York, if the scale is correct, and it feels good there.

So the big picture stuff is all set but the rest of the world is still coming into focus. If that's a bit too maddeningly vague for you, Kojima offered at least one solid new detail: Reedus' character won't always stay nude 'n oily, as he was when we met him in the first trailer.

"For the teaser, also, where you see Norman naked, that's something that I very specifically had in mind. I wanted people to see first a naked Norman, and then from there you'll be able to see him in different costumes, different hairstyles, different equipment, and that's as much as I should say today."

Spaghetti image by jeffreyw, used and modified under CC 2.0 license