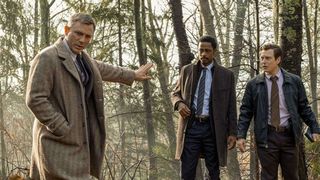 Knives Out has been a surprise success, grossing almost $250 million worldwide – a huge number for a non-franchise movie in today's climate. Unsurprisingly, there's a thirst for more, and Knives Out could soon become a franchise of its own as director Rian Johnson has confirmed that a sequel to the whodunit is en route.

Speaking to The Hollywood Reporter at a pre-Golden Globes party, Johnson revealed that the sequel would revolve around Daniel Craig's Texan detective Benoit Blanc investigating a new case. The writer-director added that the intention is to turn the project around within the next year.

The filmmaker had previously spoken about how Benoit Blanc could be a character like Agatha Christie's Poirot who investigates various cases in different stories. Johson said of Craig returning to the role: "Daniel had so much fun doing it, and he wants to do more."

There's been no confirmation from Lionsgate regarding a sequel, though THR notes that the success of Knives Out should guarantee a sequel. The first movie cost $40 million, and has been hugely profitable.

Meanwhile, Craig is due to step down as James Bond following Bond 25, AKA No Time to Die, which reaches cinemas later this year.