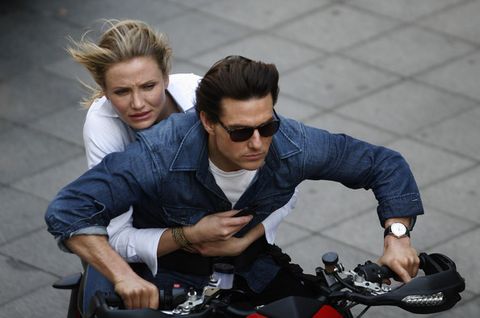 Knight And Day review - Plane, train, speedboat, motorbike. Boston, Seville, the Alps, the Caribbean… One thing you can’t accuse Knight And Day of is standing still too long.

On paper, it’s an attempt to update the effortless fizz and whiz of old-school runarounds like North By Northwest, The 39 Steps and Charade. On screen, it fires up more of a True Lies vibe, complete with casual brutality and weary woman-losing- controlof- a-machine-gun joke.

Luckily, there are fresher jests on offer in James Mangold’s (Walk The Line) action romance. Actually, there’s only one great gag, but it keeps the film together: Tom Cruise’s absurdly unflappable charisma as Roy Miller, an on-the-run secret agent who part-woos, part-dupes everywoman June Havens (Cameron Diaz) into riding shotgun on his non-stop globetrot.

Rather than try on Cary Grant’s suited suavity for size, Cruise playfully trades on his own traits, essaying boyish cheer and chivalry in the frequent face of death. True, Roy’s just too darn nice for the script’s hints that he might be mad or bad to raise any suspense (producer Steve Pink’s hitman farce Grosse Pointe Blank casts the faintest of shadows). But Cruise’s outsized affability (those iconic pearly whites get a lot of exposure) gives Knight And Day the pop it needs.

It’s all Diaz can do to keep up. Admittedly, Patrick O’Neill’s screenplay doesn’t give her much to grapple with – June’s either squealing among the flying bullets or blacking out. A scene involving a truth serum allows the camera to seize on some Diaz pizzazz. But you can’t help feeling the dip in energy when Cruise goes AWOL for a stretch in the third act. Neither Diaz nor a capable supporting cast (including Peter Sarsgaard and Doubt’s Viola Davis) are able to keep the film out the doldrums until it revs up with a swerving bike chase through Spanish streets.

Upping the ante with a herd of running bulls, it’s a road-rush that offsets the disappointing denouement. Elsewhere we get a fiery freeway pursuit let down by iffy back-projection; a rooftop chase that unwisely tries to compete with Bourne; and a kitchen knife-fight where Mangold strikes the sharpest balance between callous and comic.

Patchy action, then, but plenty of it – too much, perhaps for the all-important sizzle between the leads to serve as more than a sideshow. A little more standing still might’ve helped – without true romance, Knight And Day tips too far towards the thrill-ride end of the equation; fun, but only in the moment.