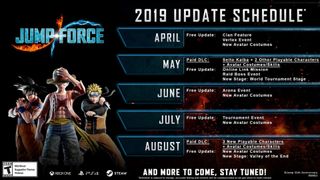 Jump Force is set to take its anime crossover fighting fest to the next level with oodles of upcoming content for us to tackle our way through.

Bandai Namco revealed a Jump Force roadmap on Twitter which outlines all the scheduled content we can expect from April right through to August, and happily we’re going to get a lot of free updates.

The first free update hits in April with new Avatar costumes, a Vertex event and the Clan Feature.

Seto Kaiba from Yu-Gi-Oh will be the first paid-for DLC available in May along with two other yet to be announced playable characters. Topped off with some additional avatar costumes and skills, the paid for content is included in the Characters Pass, so it will download automatically if you’ve already bagged it for yourself.

Along with the new characters in May, another free update will give players an Online Link Mission, a Boss Raid Event and a new World Tournament Stage.

Here’s what you can expect through to August:

With six new playable characters joining the roster and a generous helping of free content, it looks like we’ll have plenty to keep the fighting fresh in future.

Want more from Bandai's latest punch 'em up? Here's how to power through the Jump Force character unlocks.