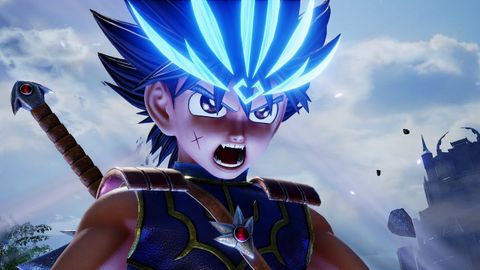 An ambitious brawler that suffers from something of an identity crisis, Jump Force will nevertheless delight anime fans – especially those of a vintage who knows the more obscure characters included here.

I always suspected anime would lead to the end of the world, and I was right – at least in Jump Force, Bandai Namco's crossover brawler celebrating 50 years of Weekly Shonen Jump by smashing together heroes from Dragon Ball, One Piece, Naruto and more.

A dark force has ripped multiple manga worlds from their place in the cosmic firmament, sending them on a collision course with the "real" world and causing global destruction. Nearly killed in the midst of an attack on Time Square by Dragon Ball Z villain Frieza, you play a new hero dragged into the battle after being rescued by Trunks.

A hero for the (p)ages

The lead-in is simply justification for you to create your new heroic avatar, customising their design as you're reborn. The more Shonen Jump manga and anime you know, the more you'll get a kick out of the editor tool, with assets such as hairstyles, eyes, and facial features cribbed from other characters. Initially it's just their aesthetics, but as you progress you'll be able to add gain access to their signature moves, dubbed J-Skills, and be able to add them to your own attack repertoire. With all that still to come though, I fiddled about for a few minutes, created a suitably outré spiky-haired warrior, named him Sean Anjump (geddit?), and set about saving the world alongside Goku, Luffy, and dozens more classic characters.

Now, I'm one of those weirdos who plays fighting games for their story – I know far too much about SoulCalibur's history and the interdimensional politics of Mortal Kombat's realms, for instance – but Jump Force's story ultimately feels more like a quick justification to bring together so many disparate Shonen Jump heroes. Fair enough, you might say – there are a lot of characters to squeeze in, from the globally renowned trio that grace the cover to faces only hardcore manga enthusiasts may recognise, such as City Hunter's Ryo Saeba, or newer characters yet to reach mainstream attention, like Black Clover's Asta.

With such a vast roster, it's perhaps understandable but ultimately disappointing that the game rarely tries to do anything interesting with its characters, relying instead on "I've gotta get stronger!" tropes that anyone versed in these anime shows will be familiar with. There are some interesting exceptions to this – Death Note's Light Yagami and his death god partner Ryuk weave throughout the single player campaign working on their own schemes, while original villains Kane and Galena prove unique antagonists. These are very much exceptions to the rule though.

Jump Force's biggest problem though is that it doesn't seem to quite know if it wants to be a story driven RPG or a fighting game. The story links each battle, and the battles move the story along by unlocking new characters to join the in-game Jump Force alliance, but you earn EXP for each brawl, and between them you'll buy and upgrade skills, engage in side missions to level up your characters, or buy cosmetic items. There are dozens of stats and attributes to consider, along with which particular set of skills you equip to your main character – which, of course, can themselves be levelled up and enhanced. It's all a little overwhelming, when all I wanted to do was slap the irritating grin off ninja brat Boruto.

There's also no real consistency to how the game progresses. Some fights are one round brawls against story-pivotal characters, others are multiple rounds against Venoms, the grunts du jour. Sometimes you'll be battling with just your avatar, other times with an allied hero, others still going in with a full team of three, as is the standard for multiplayer fights.

Check out all the fighters

It's all rather oddly strung together, with an awkwardly staccato rhythm for a fighting game. Cutscene, fight, find who to speak to next to move the story along. Sometimes that means speaking to Director Glover, the commander of the Umbras Base hub world you'll explore between fights – a too-large and mostly empty space, where character animation downgrades to an embarassingly janky spectacle – or finding characters hiding around.

Most of the time, you'll just select a Key Mission from a kiosk – a soulless dispensary mechanic that really needs to be laid to rest – complete the objective, then be deposited right back in front of the clerk to repeat the process. Eventually, these missions run dry though, leaving you to wander the base until you spot an exclamation mark on the map, indicating what's next. If the story is going to be so crucial  to a game like Jump Force, it really should have been better integrated into its structure, rather than being an annoyance you have to chase down.

Approach Jump Force purely as a fighter, avoiding as much of the story and RPG mechanics as possible and it gives a better impression – but still a bit of a mixed bag. You can pick up Free Missions to play through solo, with set challenges to complete which help power up your characters, or just jump into player vs CPU or PVP bouts, with support for online or local multiplayer. This, technically, is the meat of the game, with three-on-three tag battles pulling from the whole roster.

As I expected, not much has changed for the final version of the game compared to my pre-release hands-on, just two weeks ago. As I'd hoped, playing the game from the start does make certain mechanics clearer, the mandatory tutorials proving necessary in how to even best manoeuvre around the 3D arenas – pulled from real world and anime locations alike – but Jump Force is still victim to a control system that tries to do too much.

On the plus side, its most basic controls creates a system where characters as disparate as sword-wielding heroes Dai from Dragon Quest: The Adventure of Dai can clash with melee fighters like Fist of the North Star's Kenshiro, without having to worry about how they fit together. It's simply a mix of weak and strong basic attacks on square and triangle (on PS4, version tested), and then thows on circle. Anything flashier or bespoke to a certain hero is done by charging energy by squeezing R2, then selecting one of four moves from the face buttons. At this level, it works, it's accessible, and it's fun.

The problems come when you try to master Jump Force's even slightly more advanced mechanics. Take something as simple as swapping team members, done with a tap of L2. Or it's meant to be a tap – frequently nothing would happen unless I held it down for around a second, and this was the case on multiple controllers tested, to eliminate the possibility of it just being a duff pad. But! holding down L2 for too long engages a team attack, which you may not want to do at that point.

Then there's R1, which is generally block. Except, as a loading screen tip prompts, you can "press R1 just as you're hit by an enemy's attack to dodge it" – a feat I don't think occurred once for me. In fact, dodging and blocking is a frustration, with successful evasions feeling like flukes. It's almost excusable not to be able to avoid an Awakening move, the game's ultra-attacks, especially as they're devastating but never one-hit KOs, but when extricating yourself from just a volley of regular blows feels impossible, it begins to grind.

It's annoying, because there's so much else to like in how Jump Force's fights work. It really feels like playing an action anime at times, in a way few other games have managed. Lightning flurries of punches and kicks are accompanied by flying dashes around the battlefield, while each character's unique moves are brilliantly incorporated and delivered with catchphrase bellow – in Japanese, of course. The approach, fittingly enough, lets the animation shine, with those Awakening moves some of the most impressive specials I've seen in a fighter. It's just all let down by a feeling that the game is playing by slightly different rules than the ones it's given you.

Despite all of its clear flaws, I couldn't help quite liking my time with Jump Force. There's something quite charming about being able to team up Saint Seiya characters with ones from JoJo's Bizarre Adventure and even Yu-Gi-Oh, and engage in visually stunning battles. It's a victim of trying to do too much though, probably a result of wanting to mark such an auspicious pop culture occasion as 50 years of Shonen Jump. A little more restraint, allowing developers SpikeChunsoft to focus on either its fight mechanics, its RPG elements, or its story, would have done wonders. Instead, it feels as though nothing has the attention to really shine.

An ambitious brawler that suffers from something of an identity crisis, Jump Force will nevertheless delight anime fans – especially those of a vintage who knows the more obscure characters included here.