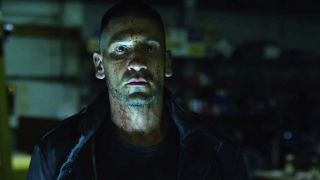 Daredevil season 2 cooled off a little on the sharpness and ingenuity of season 1, but it still packed one hell of a punch. Or punches, should we say, due to the introduction of fan favorite vigilante Frank Castle, played by Jon Bernthal. Castle's backstory is well-known to comic book aficionados; he's a war veteran torn apart by rage after a tragedy strikes his family prompting his change into The Punisher.

All those bullets flying about sure made it look like he'd made that transition in the show, but Bernthal says we've not even met The Punisher yet. "I think when you’re talking about characters like these, the way they fight, what’s motivating the fight is very important," says Bernthal during an interview with Awards Daily.

"Beating someone up to drag them into jail is different than someone who is exercising his rage on people. The Frank Castle you find in this story is not The Punisher. He’s reeling from the loss of his family. He’s driven by rage and is on a singular mission to find these people who took his family from him, and do it as brutally as possible."

Bernthal's approach to Castle's transformation adds up. Especially seeing as Castle fully embrace his rage and brutality - and the person he's become - right at the end of season 2. You could treat that entire season as his version of an origin tale. It's not until those parting shots that he dons The Punisher's iconic skull shirt, after all. His proper debut as the character likely won't emerge until his spin-off series; even though Bernthal says he's "no idea" what's next for Frank. "We are going to do a show with him next year. I’m really excited about that. We’ll have to see."