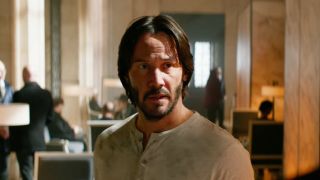 John Wick is one of those movies that sneaks up on you with how clever it is, and John Wick: Chapter 2 is going to push those weirdly wonderful choices even further. Case in point: director Chad Stahelski says it will take the elements of Greek folklore that appeared in the first film - gold coins for Charon the concierge, for example - and blow that out into an entire mythologically inspired criminal underworld. But how'd they get started on this idea in the first place?

"[T]he Continental would be like the underworld," Stahelski told SFX magazine. "New York is a great city, because it feels like you're underground, even though you're on the street level because of the high rise and depth of the city. So we were just like, 'OK. The underworld has Hades – you know, the different gatekeepers of it. And everyone's a different kind of god that takes care of a different kind of service.'

"So we went back and looked at the script like that and broke it down to iconic things like the gold coins, like talismans. The guns obviously become swords. The suits become armour."

By expanding this world of well-dressed killers beyond New York in John Wick: Chapter 2, Stahelski and company are making the story even more overtly mythological. Of course, if you prefer to leave the Olympian references aside and just show up for the well-choreographed gunfire, they're totally fine with that too.

"[Rome has] a much older history. If anything, it grounds and gives our world a lot more history and folklore than we could have done in America," Stahelski said. "If anything, it's the most expansive thing you could do for the world, because it shows you it's been around a lot longer than just the United States. And when you say 'myth', it doesn't just mean 'ancient'; it means there's a lot of roots to the story. John Wick is just passing through."