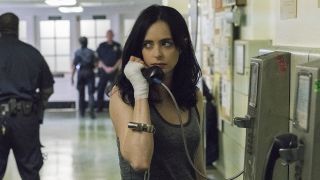 Everyone’s favourite alcoholic superhero is back on March 8 as Jessica Jones season 2 hits Netflix worldwide. While we got a good dose of the sarcastic PI-turned-reluctant hero back in August with The Defenders, it feels like her second solo outing has been a long time coming. The success of the first season has a lot to do with that demand - as does the fact that her fellow Defenders watered down her damaged charm somewhat in the crossover - but can the second season live up to the hype? I’ve been lucky enough to see the first five episodes of the 13-episode run (yes, 13 again!) before release and happily, it’s just as good as the first season... so far.

Not so happily, it’s unclear whether it has anything new to offer audiences. Revisiting Jessica’s anger issues and troubled past with more depth reminds us why we fell in love with the hero in the first place, but it’s not enough to sustain a whole season, and of course, we’re missing the wicked charm of David Tennant’s Kilgrave (although maybe not for much longer - more on this later). With eight episodes left to go, there’s plenty that could happen to swing this series one way or another, but if you want to get a spoiler-free idea of how good the start of the new season is, read on for my preview.

We rejoin Jessica as she’s trying to adjust to life after Kilgrave, with a newfound (and decidedly unwanted) level of fame as a super vigilante. The opening sequence is Marvel-Netflix perfection as it establishes Jessica’s return to PI work, but with new problems, which she handles in an oh-so Jessica Jones kind of way. It isn’t long until she’s back to her old tricks - not that she ever really left them - drinking her pain into oblivion and pushing her nearest and dearest away. As is revealed in the trailers, despite Jessica’s desire to forget everything bad that ever happened to her, the past comes back with a vengeance in season 2 demanding her attention. Although this may sound too similar to what happened in the first outing, season 2 actually proves Kilgrave - and that period of Jessica’s life - is only one small part of a severely fucked up history. We learn things about this unconventional hero that she never let us get close to in the first season, as she tries to control her temper and do right, despite what it costs her personally. But she can never fully let go of what makes Jessica Jessica, which is why she finds herself in a fair amount of trouble too. Just like the character, the show is growing and developing as best it can, unable to fully move on from the hallmarks of its first season which made it a hit.

The parallels between the storylines of the second season and what’s happening in the real world are scarily similar. It’s like Jessica Jones season 2 was made for the post-#MeToo landscape - despite being written back in 2016 before the wave of sexual assault allegations in the industry emerged. There’s a danger that it could look like the series is trying to ride the coattails of that controversy to gain more attention, but nothing about season 2's traumatic character arcs feel forced or out of place. It all works with the story and the universe that was built in the first season and, if anything, this mirroring of real world events just further proves the relevance of the series. Once again, Jessica Jones is one of the truest representations of the female experience we’ve ever seen on the small screen, showing that even superheroes aren’t immune from harassment.

As in the first season, Krysten Ritter is the star of the show. Her turn as the damaged Jessica Jones is heartbreakingly powerful. So much so that’s it’s difficult to watch at times as she struggles to come to terms with her past. If The Defenders tricked you into thinking she was doing ok after finally escaping Kilgrave (by snapping his neck), the very first episode of Jessica Jones season 2 reminds you that her problems go way beyond that mind-controlling psychopath. And unlike a lot of hero-based tales, Jessica Jones doesn’t shy away from the fact that killing someone - even someone as evil as Kilgrave - isn’t an easy thing to live with, and we explore what that does to Jessica, along with her troubled past, as she tries to carve out something resembling a life for herself.

The rest of the cast are on fine form too, and there are real developments and growth all around. Trish (Rachael Taylor) is getting ever closer to her Hellcat destiny as she seeks out her own vigilante cause, Malcolm (Eka Darville) has thrown himself into becoming an expert PI and having Jessica’s back (even when she doesn’t want him too), and Jeri (Carrie-Anne Moss) is as ruthless and watchable as ever, until she gets a dose of hardcore reality, which completely shakes up her worldview. As for new characters… it’s a little too early to pass judgement, but there’s definitely potential. J.R. Ramirez joins as Oscar - the new superintendent of Jessica’s building who’s none too pleased about having a powered person in the vicinity of his young son. There’s also PI competitor Pryce Chang, played by Terry Chen, who wants to either absorb Alias Investigations or destroy it. And finally, there’s Trish’s new boyfriend, Hal Ozsan's Griffin, who is so charmingly British you can’t help but fall for him. The other new face worth taking notice of is played by Oscar-nominated Janet McTeer and details about her character are thin on the ground. I’ll steer clear of mentioning any spoilers here, but suffice to say, it pays to have an award-worthy actress on the team.

Now for the elephant in the room… rumour has it David Tennant’s Kilgrave is set to return despite his death (he's also appeared in a couple of promo stills for season 2 - above - and possibly even in the first trailer) and, indeed, it’s hard to imagine Jessica Jones without him given how integral he was to season 1. Mild spoiler alert: he hasn’t appeared in the first five episodes (not even in flashback form) and while I’m glad the show hasn’t quickly fallen back on his show-stopping villainy to keep it going, his absence is noticeable. How could it not be? Some reviews you might have seen have suggested that the replacement villain of season 2 isn’t up to scratch - I’d prefer to reserve my verdict until I’ve seen more of the show. While five episodes in we’re still waiting for a truly spectacular ‘bad guy’ moment there’s still plenty to play for when you’ve got eight more episodes to go. For now, Jessica Jones is back doing what she’s good at - pissing people off and drinking - but we’ll have to wait and see if the second season has anything genuinely new to show us.

Our full season review will land the same day as the series - March 8 - but until then, you can see what everyone else is saying about Jessica Jones season 2 in our critical round-up.