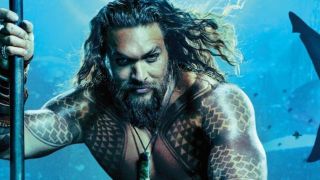 How different things could have been. In a parallel universe we never would have witnessed Jason Momoa as Aquaman. Instead, as he reveals, he could’ve swapped the trident for a chance at going face-to-face with Captain America. Or joining forces with Guardians of the Galaxy. Or playing Batman. The man has had a lot of very interesting auditions over the years…

“I met the Russo brothers,” Momoa tells EW, “Who are amazing. It was one of the best meetings I’ve ever had. I was going to do something with them, which unfortunately didn’t work out.”

That sounds like it was almost a done deal. Gah. But who would he have played? While Momoa plays it fairly coy (“I don’t know. It was going to be a villain, I think.”), pure guesswork leads me to believe that, thanks to his physique, he would’ve been a sure thing as Crossbones in Captain America: The Winter Soldier, a part that eventually went to actor Frank Grillo.

But that’s not Momoa’s only dalliance with the MCU. The actor, who would go on to join the DCEU in 2014, also auditioned alongside Chris Pratt for a mystery role in Guardians of the Galaxy but “that didn’t work out.” I can’t be the only person thinking he went for Drax, can I?

It was another failed audition after the Guardians failure, this time on the DC side of things, that eventually led him down the submerged path to becoming Arthur Curry. Despite heading to a Batman audition, Momoa was adamant he wasn’t right for the role, so went about things in his own unique manner: “So in the meeting, I just played it as if Batman had died in an alley and some thug picked up his suit and put it on. I just played him as a smart ass, jaded and sarcastic. And that’s when Zack was like, ‘I have an idea…’”

So, there you have it. Jason Momoa’s come as close as anyone to joining the MCU and that, in a roundabout way, led him into the arms of the DCEU. It’s funny how these things work out, isn’t it?

For more Aquaman, and the rest of the new trailers that are ready to drop across the weekend, keep an eye on our constantly-updating San Diego Comic Con 2018 hub.