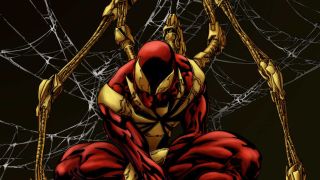 Among many other things, Captain America: Civil War is an impressive juggling act; It featured a ton of super-powered heroes - some of whom we hadn't even met yet - and gave them all a valid reason to fight one another. Zeroing in on which characters to use (and how to use them) took the Russo Brothers months, and during a recent interview they revealed that Red Hulk - whom comic book fans will know is General Thaddeus Ross, played by William Hurt in the movie - almost made the cut:

Russo later added that the Iron Spider suit "falls in that category of anything’s possible", and given that Robert Downey Jr. is starring in Spider-Man: Homecoming I would not be surprised if Tom Holland's hero sports the Stark-powered duds at some point next year.

Directed by Joe Russo and Anthony Russo, and starring Chris Evans, Robert Downey, Jr., Scarlett Johansson, Chadwick Boseman, Tom Holland, Anthony Mackie, and Sebastian Stan, Captain America: Civil War arrives in digital format in the US on September 2. The Blu-ray, Blu-ray 3D, and DVD hit the UK on September 5 and the US on September 13.