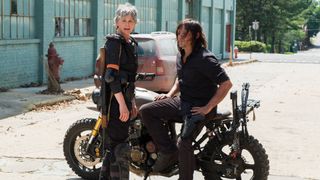 The Walking Dead season 8 certainly kicked off with a bang. There were explosions a-plenty in the season premiere, a few interesting teases, and more zombies than you can shake Morgan’s stick at. Of course, this left the internet doing what it does best: ranting and raving. Did they enjoy it? And what did they make of that Rick scene? Read on to find out… Spoilers for The Walking Dead season 8 premiere

There’s only one place we can start. Old. Man. Rick. Oh, and Weird Al for some reason.

me trying to figure out what these old man rick scenes mean #TWD #TheWalkingDead pic.twitter.com/fqyGz4Pidj23 October 2017

Everyone trying to figure out the timeline after the time jump with old man Rick#TheWalkingDead #TWD pic.twitter.com/82IdjrUQoZ23 October 2017

I’m just as confused as you are why “Another One Rides the Bus” was featured in #TheWalkingDead season premiere, but I’m extremely honored! pic.twitter.com/CzCqcQOiie23 October 2017

If seeing Old Man Rick listen to Weird Al wasn’t enough elder abuse for you, the leader of the Hilltop, Gregory, also got thrown down some stairs – and proved what a coward he was.

#TheWalkingDead Gregory getting pushed down the stairs pic.twitter.com/x0L5pS8dVs23 October 2017

Oh, and now Gabriel is with Negan. Praying might not be enough… If only Rick was a better shot.

Our father, who art with Negan

@TheWalkingDead @WalkingDead_AMC When you find out you are sharing your hiding spot with Negan! #twd #TWD100night pic.twitter.com/V3krQkTsvD23 October 2017

There was even time for a big death. That’s right, one of the original cast members has gone to the great parking lot in the sky.

In fact, there was so much going on that it left people a bit befuddled. Not least of all why Rick took a photo of Negan, and where he got that camera from.

WHAT IS GOING ON

I guess I don’t understand military strategy. Cause I don’t know WTF just happened for the last hour. #TheWalkingDead23 October 2017

The real question is where tf did rick get the Polaroid camera from? #TheWalkingDead23 October 2017

Is anybody else wondering what the hell is going on??? #TheWalkingDead23 October 2017

But, don’t worry, there was some d’aww moments to keep us all warm and fuzzy inside. And that was just Tara eating Twizzlers.

The gang is back

Tara, this is a red vines family, spit out that twizzler. #twd #ParksAndRec23 October 2017

We got our once a season Carol/Daryl hug tho #TheWalkingDead pic.twitter.com/4NEqahihV323 October 2017

Not only did Old Man Rick hint at a time jump (or something else entirely), Judith is now a little bit older, and Maggie still isn’t showing signs of her baby bump. Time is a flat circle. Or something.

How is Judith a teenager and Glenn’s sperm hasn’t even reached Maggie’s egg yet? #thewalkingdead #twd #Demdeadz pic.twitter.com/oXefKG9qEa23 October 2017

But what was the internet’s overall opinion of the episode?

#TheWalkingDead is back, and the premiere was MIND-BLOWING... really. What a way to start another great season! #TWD100Nite pic.twitter.com/Wr0MV2o4kW23 October 2017

Basically, a lot of questions, and a whole lot of memes. No memes here, but there are 9 questions we have after watching The Walking Dead season 8 premiere.