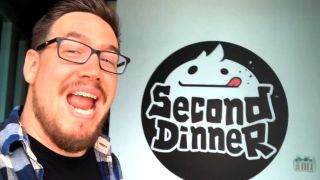 We have a new Marvel game to geek out over while we wait to hear anything about The Avengers Project. Second Dinner, a startup game studio built by ex-Hearthstone developers including game director Ben Brode, announced today that its first project is a collaboration with the home of Captain America, Spider-Man, and like 50 other Spider-Men. Second Dinner is still expanding, but it already has a prototype and playtesting going on for whatever the game will be.

Art director Jomaro Kindred revealed that the source material will be familiar for many as the announcement video quickly turned into a recruitment drive: "We are super excited to be working on a Marvel game. We've all loved this universe since we were little kids, we read the comics, we grew up with it. So if you want to be part of this experience with us at Second Dinner, let's put our twist on it and bring it to the world."

Second Dinner aims to "make deep, satisfying games that are optimized for mobile" according to its official site. Given the fact that all five of the studio's current members most recently worked on Hearthstone before joining Second Dinner, it's logical to conclude its first project will be a mobile card game… except for the fact that Marvel already has a mobile card game called Marvel Battle Lines, and it just came out in October. Hum.

Another couple confirmed details from the announcement video: the game is being built on the Unity engine (same as Hearthstone) and it will use Amazon Web Services. AWS hosts many online games, not to mention much of the modern internet, so I'd expect Second Dinner's Marvel project to be a thoroughly online experience. Again, like Hearthstone. Oh, also, Second Dinner has a ton of cash, thanks to a $30 million minority investment from Chinese tech and gaming giant NetEase.

Normally this would be the part where I say we'll likely have to wait a while to learn much more about the game, but Second Dinner's trying hard to do the "small and fast" thing even as it links up with corporate titans, so who knows?

Check out every MCU movie ranked from worst to best to get your own ideas for what you'd like to see in a game.