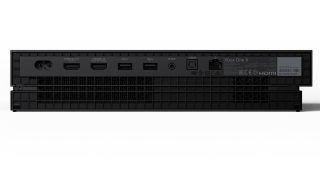 Microsoft used E3 2017 as a way to introduce the world to Xbox One X - even if its press conference didn't focus much on the hardware itself. Still, there's a new sense of "realness" to what was once Project Scorpio. The new console is on the show floor, and we know what it looks like. But what about those all important ports, tucked away on the rear of the unit?

That's what the back side of Xbox One X looks like, and if you own an Xbox One S, it should seem pretty familiar. In fact, while talking about the console during E3 Coliseum (a livestream event of interviews, demos, and panels), Xbox's Albert Penello noted that the ports are exactly the same - and even in the same order - as on Xbox One S. The idea being that this will make it easier to swap out Microsoft's older model for its newest one, should you choose to upgrade.

It also means that there's still an HDMI In port in case you want to use Xbox One X for its DVR-like features and ability to snap to live TV. Unfortunately for those who bought into the original vision of Xbox One with Kinect, there is no port for the microphone / camera device. Microsoft sells a $40 USB adapter if you really want to keep that dream alive. But hey, at least there's no mammoth-sized power brick this time!