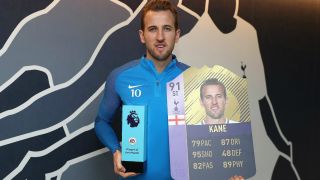 England’s footballers have already shattered conventions at the 2018 World Cup by not being utterly, unspeakably awful. Now captain Harry Kane has revealed another way in which he and his team-mates are parting with tradition: they’re using videogames to stay sane between matches. One in particular.

“Tell us something you’re doing here that you really enjoy when you’re not thinking about scoring goals?” veteran BBC presenter Gabby Logan asked Kane in an interview broadcast at half-time of yesterday’s Belgium vs Japan fixture.

“As silly as that sounds, playing Fortnite passes the time quite well,” he continued. “There are quite a few of us playing a few games of that.”

“Are you playing more Fortnite than ever?” continued Logan.

Kane has actually revealed his Fortnite addiction before, taking to Twitch to broadcast matches also featuring Tottenham and England team-mates Dele Alli and Kieran Trippier. Leicester centre-back Harry Maguire is another of the international contingent known to be a fan.

Kane's handle is hkane93, and you can see his stats on the Fortnite tracker. His lifetime match count is 1,052, with 771 kills and 76 wins. Suffice to say he's perhaps not quite as proficient at videogames than on the football pitch, with a 7.20% win ratio. Alli (Delstroyer14) fares marginally better, with 230 wins from 2,602 matches, at a win ratio of 8.80%.

It’s a massive turnaround from the previous generation of footballers, who were often mocked over the merest notion of enjoying video games. The most notorious example being former Liverpool and England keeper David James, who put his poor form for Newcastle back in 1997 down to an addiction to Tomb Raider.

Fortnite football pitch locations and where to score goals

With fiance Katie Goodland and daughter Ivy remaining in the UK for the World Cup, Kane admits there’s going to be some adjustment time needed for the trio when he arrives back in England.

"The missus is going to have a bit of a shock when I get home,” he told Logan. “She says it feels like we are on a boys’ holiday – with everyone playing Fortnite, and no babies, and stuff like that. I’ve got to enjoy it while it lasts.”

England play Colombia tonight at 7pm UK time, with Kane currently leading the race for the World Cup golden boot. Unless you’re a Scottish or Welsh reader, let’s hope the squad’s inevitable post-match Fortnite face-offs are in celebration rather than commiseration.

Looking forward to controlling Kane in his more traditional role? Then check out 5 things you need to know about FIFA 19's new Champions League mode.