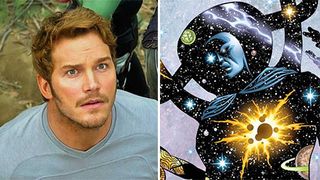 You must have seen Guardians of the Galaxy 2 by now which means you spotted the many Easter eggs director James Gunn hid in his space opera sequel. Right? While most were just obvious nods to the first movie (Howard the Duck) or recognisable pop culture references (Mary Poppins), there’s also a few more complex references to the wider MCU. They’re a lot harder to spot and might actually tell us something about future movies so you don’t want to miss them. Luckily, we have a list...

The Easter egg: During the space jump sequence where Rocket, Yondu, and Kraglin are trying to make their way to Ego’s system, there’s a super quick shot of what looks like two Kronan doing battle. This rock-looking alien species made a brief appearance in the first Thor movie and is set to return in Thor: Ragnarok.

What it tells us about the MCU: Some fans have speculated that one of the Kronan could be Korg, who will appear in the third Thor movie, played by director Taika Waititi. It’s unlikely that his role will have wide reaching implications for the MCU - but it’s a nice little nod to a future MCU movie.

The Easter egg: When Ego hijacks Quill’s mind and tries to manipulate him into helping him, we see Quill go into a trance like state and he literally sees stars in his eyes. He also whispers, “Eternity,” which is a character in the Marvel comics closely related to the Infinity Stones.

What it tells us about the MCU: Eternity is an extremely powerful being who was created when the universe was born. He basically controls all living things… and is all living things… or all living things come from him? Anyway, the interesting bit is that his sister, Infinity, has links to the soul gems, AKA, the Infinity Stones. Did Quill see something that could be useful to the Avengers in Infinity War?

3. Stan Lee is a Watcher

The Easter egg: Every MCU movie has a Stan Lee cameo and GOTG2 is no exception. However, unlike most of the comic book creator’s previous appearances, this one sees him referencing his other cameos as he tells his fellow Watchers about his travels.

What it tells us about the MCU: It confirms a long-held popular fan theory that all of Stan Lee’s character cameos are the same person. That he actually plays a Watcher - a comic book race Lee created himself - who travels the galaxy observing, but never interfering, in the goings-on of the universe.

The Easter egg: In one of the film’s post-credits scenes we see Sylvester Stallone’s character, Stakar Ogord, reform the original Guardians line-up (minus Yondu) as his Ravager team, and one of them makes an interesting Doctor Strange reference. If you look closely you’ll see that Krugarr (the red skinned alien) uses mystic hand signs similar to Doctor Strange to communicate.

What it tells us about the MCU: Fans have speculated that this confirms that magic isn’t just something that a certain group of humans have mastered, which… duh, but it also might confirm a comic book storyline in the MCU. In the comics, Krugarr is discovered and trained by none other than Doctor Strange, and eventually becomes the Sorcerer Supreme of his era. Does this means we’ll be seeing something similar in the future?

5. The birth of Adam Warlock

The Easter egg: This one is pretty easy to spot but means a lot for the future of the MCU. In another post-credits scene, we see Elizabeth Debicki’s Ayesha sulking after being defeated by the Guardians but she reveals a dastardly plan. She says she’s grown someone who’ll be able to destroy the Guardians and that she’s going to call him Adam.

What it tells us about the MCU: This is a pretty obvious reference to the character Adam Warlock who Gunn wanted to include in the movie but didn’t have space so decided to ‘save him for a later’. It sets the character up as a possible villain for Guardians of the Galaxy 3 but in the comics he’s usually a force for good so we might even see him turn on his creator and team-up with the Guardians.

The Easter egg: Forget the post-credits scenes, you now have to check the credits at the end of every MCU in minute detail. In case you didn’t stay to the very end to scan with laserlike precision every image and word that appearance on the screen, you missed Jeff Goldblum’s Grandmaster cameo. It wasn’t much. He just appeared dancing as the credits scrolled up...

What it tells us about the MCU: Erm… that Jeff Goldblum is in Thor: Ragnarok… which we knew. And that the Grandmaster likes to dance? Ok, so it doesn’t exactly layout Marvel Studio’s grand plan for the future, but it’s still a pretty cool MCU nod to a future film and one that’s easily missed.