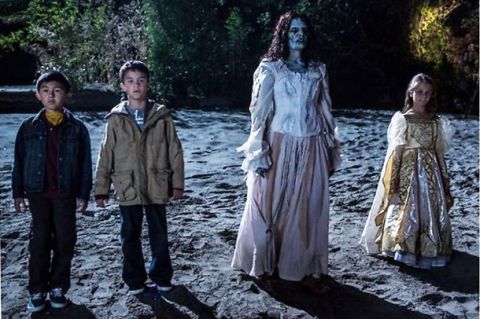 THE ONE WHERE A father/son Halloween fishing trip goes pear-shaped when the son is abducted, seemingly about to become the latest victim in a series of child murders. Meanwhile Monroe takes on some bullies in his own inimitable style.

VERDICT “La Llorona” is a spooky Halloween tale which does little to move on any of the ongoing plot threads, but makes for some genuinely creepy moments and some very funny Monroe-ments. The lack of a Wesen monster-of-the-week made a change, although does beg the question, why were Nick and Hank investigating? Aren't they homicide division? Also, what exactly was La Llorona? Does the Grimm-verse have ghosts?

Monroe's giddy joy at the holiday that, apparently for Wesen-kind is “bigger than Christmas”was a nice (and funny) complement to the primary mystery's melancholy (was it only me who felt sorry for Llorona a bit, haunted by her past actions?). A big enough shift in tone from monsters of recent weeks, it made for a solid and involving hour, although now the go-to holiday of the Grimm-verse has passed it'll be incredibly frustrating if we don't get some kind of movement on the return of Adalind (and Rosalee, please!), the Prince Charming mystery, the Euro-royals plot and what happened to Mama Burkhardt.

But while solidly entertaining, there are still a few quibbles. Juliette (Bitsie Tulloch) is fast becoming the most ludicrous and unbelievable character in the show, which, bearing in mind the sheeple, porcupine-men and big bad wolves, is pretty good going. So a disturbing old crone meets you for the first time and is able to tell you you've been ill, you're still suffering from amnesia and are in a love triangle with two men all just by looking at you and you don't feel even a little curious to ask her how she knows this, much less indulge her to give her answers to some of the questions you've been bleating about to Nick for weeks? Apparently not. Also, the ever brilliant Sergeant Wu needs to be given more to do; Reggie Lee is beginning to steal as many scenes in comedic fashion as Sasha Roiz does in brooding style.

BEST BIT Monroe’s Halloween-themed interior decoration, and Nick’s nonplussed reaction to it. We can't wait to see what Monroe does for Christmas. Anything less than a full-on grotto just isn't trying...

BEST LINE
Monroe: "Trick or treat?" (and his unique way of dealing with antisocial Halloween behaviour)

Grimm season two is currently airing in the UK on Watch, Mondays at 9pm